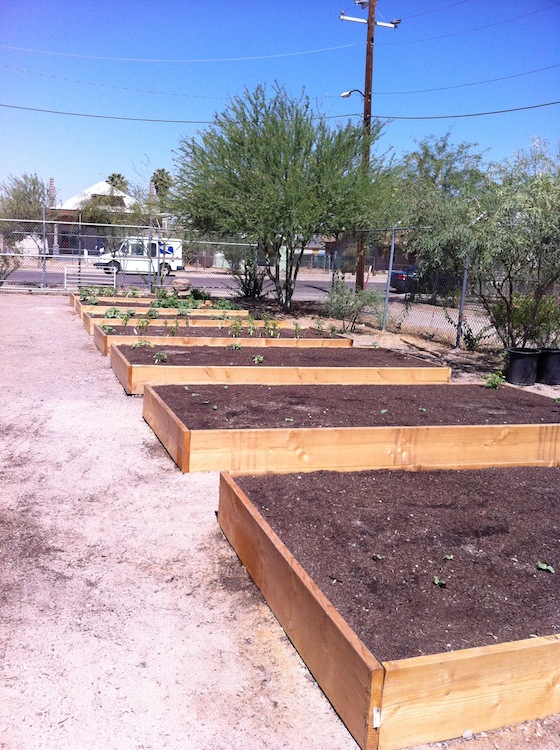 The Arizona Organizing Project Gives Phoenix Homeless a Hand Up

The urban garden at the Arizona Organizing Project put in place by the Urban Farm’s Greg Peterson.

And urban garden, a bike repair shop and a sewing and mending depot in the heart of Downtown Phoenix might sound like a wonderful entrepreneurial cooperative. That it is, but not for who you might think. These are all enterprise training modules for the homeless in Phoenix who are looking to get out of their current situation.

Scott Jacobson, along with partners George Roundy and William Black started offering services to the homeless about a year ago. They began with offering survivorship training out of a house and taking on 4 interns from the homeless community to actually help in the operation to learn the necessary skills it takes to work with others and get things done.

Their services were so well received and were filling such an important gap, they knew they had to expand. They filed to become a 501c3 and called themselves the Arizona Organizing Project. “With the State (services) crumbling, we saw ourselves as a buffer zone,” says Mr. Jacobson.

Luckily, the owner of Arizona Foreclosures on 10th Avenue and Adams heard about the group, was moved by what they do, and offered an adjacent building to AOP for rent. It’s the perfect spot, with lots of indoor classroom space along with a big parking lot that is not used to park cars, but rather used for an urban garden, some storage space, workspace for the bike repair shop, and sometimes a gathering spot for AOP patrons.

And thus began this wonderful center of services for the homeless. The overarching mission of the AOP is to offer the possibility of leading sustainable lives to those who are poverty-stricken. In this regard, they offer hands-on training in sewing (mending), gardening (in their raised-bed gardens), bike-repair as well as other programs.

They have a full time employee, her name is Susie Morales, who connects people with benefits like AHCCSS, food stamps and social security. She also helps new patrons develop a goal to get to a sustainable point in their lives and gets them enrolled in wellness classes.

A nurse comes to the center every Thursday to offer medical care and advice. Plus the AOP hosts this wonderful program for women called WOW, or Women of Wealth. This is a support group that meets regularly at the center to offer women advice, support and a sense of community as they work their way out of poverty. 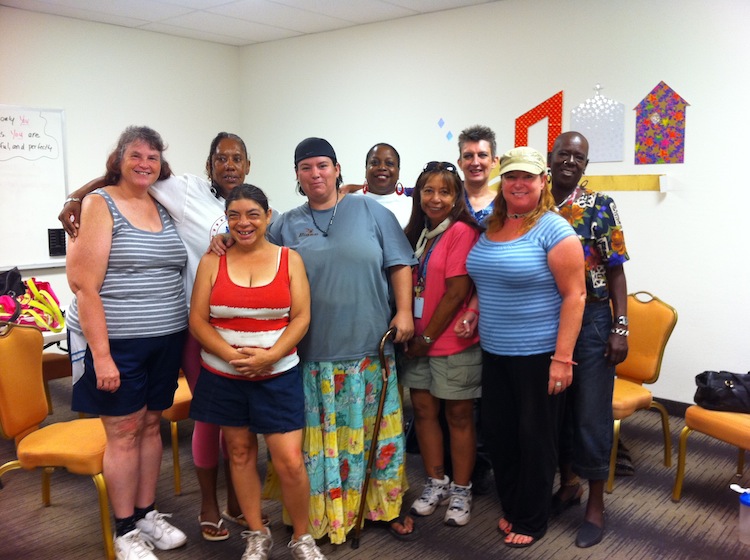 The Women of Wealth cadre I met on the day I visited.

The AOP is the embodiment of the saying “Give a man a fish and feed him for a day, teach a man to fish and you feed him for the rest of his life.” The idea is to teach the homeless skills that they can then offer to the community at large.

Another important aspect of how the AOP works is that formerly homeless people help people who are currently homeless to get out of their situation. “They are better at talking to each other,” says Mr. Jacobson, rather than having people who’ve never experienced poverty or homelessness teach or mentor them.

But will this work in this down economy, where people who aren’t homeless, don’t have convictions on their records, don’t have other extenuating circumstances like epilepsy or drug addiction are having a difficult time making money from their skills? I think yes, it will, because these skills can not only be used for enterprise efforts, they can also be used to keep costs down in their own lives. Think about it, if you can grow your own food, mend your own clothes and maintain and repair your main mode of transportation (your bike) you’re pretty well set for a self-sustaining life. 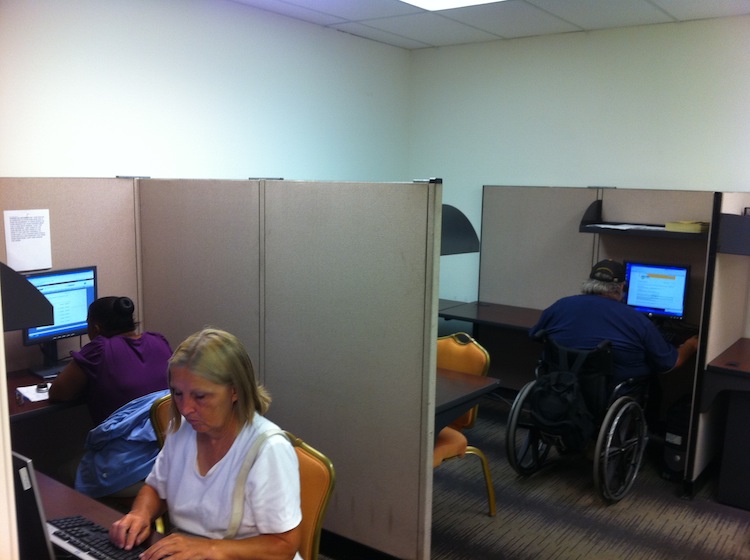 The computer lab at AOP which keeps patrons connected to job opportunities and other services.

The AOP is right smack dab in the middle of a Downtown neighborhood. It can’t be easy for the neighbors to have a homeless services facility so close to home. But the AOP tries to be as respectful as possible. Its embedded Downtown location is important in offering these services, it’s close to the Human Services Campus and is easily accessible by biking or walking to the Downtown homeless population.

Kudos to the AOP for teaching poverty-stricken Phoenicians the crucial skills they need to make their lives more sustainable. And kudos for using overall sustainable strategies such as urban gardening and bicycle-repair to help them do just that.

Because bicycling is often the only mode of transportation (besides transit) that the homeless use, when their bikes break down, they are prone to steal parts from other bicycles around town. By offering parts and repair services, the AOP is hoping to mitigate that problem.

The bicycle repair shop at the AOP.

The AOP is a young organization that is currently funded by the St.Lukes Health Initiatives, the Arizona Community Foundation and large private donors like Brad Hilton. But they are in need of help to keep up their center and keep offering their services!

They need volunteers for various tasks around the center and they need mentors in the field of landscaping, gardening, sewing and mending, crochet and bicycle repair. They could also use any donations they can get. You can donate to the AOP here.