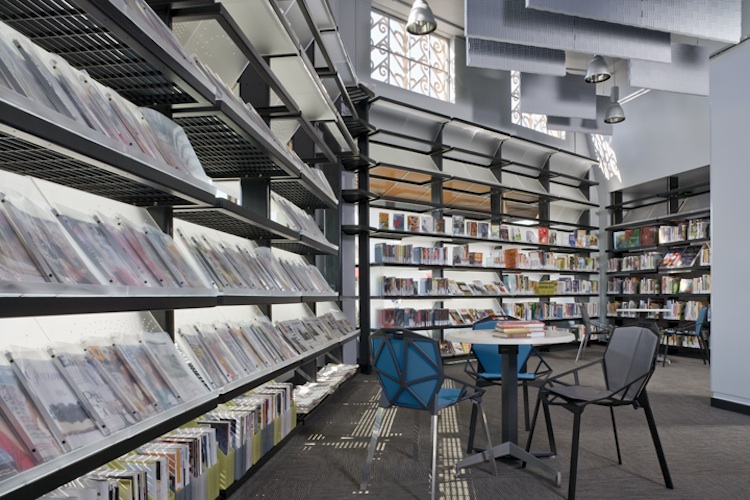 Michael Pinto on How Architects Can Save the World

In March, I had the pleasure of seeing architect Michael Pinto speak at the Taliesin West Spring Lecture series. Michael’s office, Osborn Architects, is based in Los Angeles, a city that faces a lot of the same problems as Phoenix, except magnified and sometimes it’s a little bit further ahead in addressing those problems.

The reason I decided to interview Michael was that I could tell that he takes a much broader approach to architecture than just designing beautiful buildings.  He actually thinks that architects can change the world for the better.  And so I was hooked.  Michael proved my hunch right and I was inspired by the work he does.  And you will be too.

Blooming Rock: You mentioned in your lecture at Taliesin West that it’s ok for architects to want to save the world.  What did you mean by that?

Michael Pinto: For my life as a student and later as an instructor in architecture we’re always confronted by the aftermath of socially-driven projects like Pruitt-Iago. Some of these people (behind projects like that) got chastised for being interested in the potential for change.

I think in the 30, 40 years after those (projects), we are still suffering the after effects.  Architects have sort of scaled down their ambition in response to wanting change on a broader societal basis.

How are we able to rethink how architects practice, how we approach issues facing our community or society? And how can we think about the architect as an agent of change?

It’s a big thing in my mind. I just told my entire office that I think it’s ok to want to change the world.  Let’s figure out how we align our interests and our goals with things that are needed. 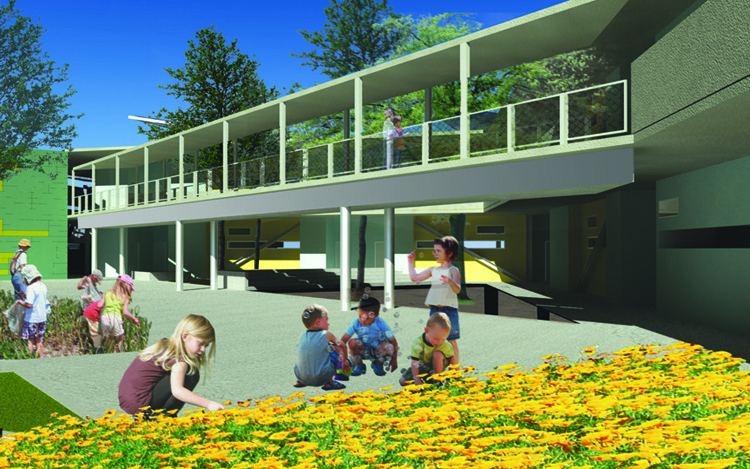 Blooming Rock: Fantastic!  Because I want to change the world too, so I was glad when you said that.

When I was watching your presentation at Taliesin, this question popped up in my mind and I thought I’d ask you now.  Your firm seems to work with a lot of public agencies and institutional clients.  How are you able to push through innovative design when you’re faced with politics, tight budgets and old thinking?

Michael Pinto: I see design as the response to some kind of problem.  I think for us design is as much about problem-definition as it is about solution generation.

If you’re clear about what the problems are that you’re trying to solve, I find that those problems are much easier to generate consensus around.

My experience has been that the innovative components in design are the clear articulation of some challenge, some problem, some issue that is right beneath the surface and yet has never truly been articulated.

Once we are able to define a problem that people didn’t realize was there, we define the problem so specifically, that the solution that we seek is inevitable.

Our response, then, is able to survive because we shift the discussion away from the subjective things, like aesthetics or color and we concentrate our efforts on things we know we can build a consensus around.

I do think we’re a bit unique in the level of attention that we focus on asking the right questions and therefore establishing the right framework of the issues, the challenges and the problems. 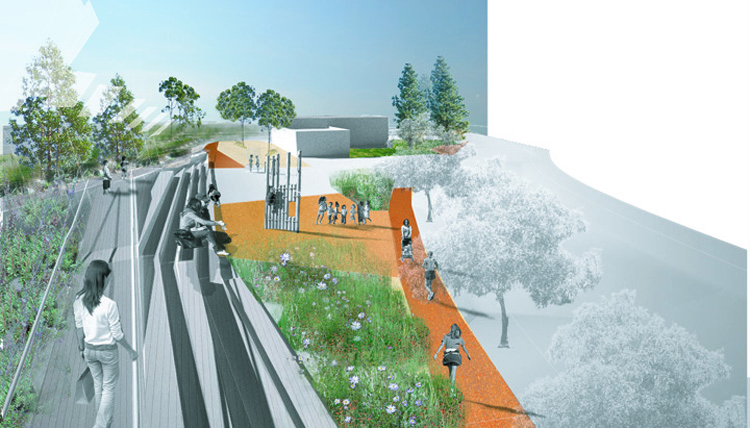 Blooming Rock: You seem to be really involved in the community at large in LA or at least in some of the community issues that are going on. How has community engagement informed you as an architect?

Michael Pinto: This is something I’ve learned post-school, I’ve learned that the public is much more aware and informed and able to articulate their needs more than I thought they would.

I think it’s another kind of misconception that’s bred in schools that you identify the project, you identify a paradigm for a way of working and then you unleash your vision.  And then along the way the architect has to generate this vision, this strong content that has to weather all kinds of critiques.

But we’ve enjoyed the fact that when we respect the public, the user groups or the patrons and solicit their input and give them information from which they can actually make an educated commentary, the better and more interesting the project is.

Again, it’s the issue of how do you ask the right questions and how do you respond to this list of problems?  It’s the most gratifying thing when we’ve been able to solve some problem that we didn’t know about.

Blooming Rock: Would you tell me a little bit about your work with food justice and sustainable farming?

Michael Pinto: A little more than two and a half years ago, the city of LA put out a moratorium on fast food in south Los Angeles.  South Los Angeles is probably the area of the city that has more economic challenges.

There are a lot of health issues around diet.  It is a food desert, in that there are fewer options for accessing fresh, locally-grown food.

So when this moratorium came out and me being interested in food as a general thing, and also interested in issues of social justice, this was a kind of a miraculous moment, kind of an epiphany. I realized that as an architect, the planning department was acting in response to food issues and there is this social justice component.

(I asked myself) how can I participate, how can I get engaged?  So that’s kind of how it started.

My program at SCI-Arc dealt with social issues with one-off design-build projects with non-profits and communities. I went to the director and said that I want to do a three-year program on food.

The response I got was a little bit surprised and confused. We’re architects, what do we have to do with food?

And I talked about the moratorium and I explained a couple of pilot projects I thought we could do.  And I got some approval to get some things going.

Around that same time I got a call from a woman from the Watts Labor Community Action Committee.  She had seen me speak at a conference and had called me to say she’d love to work with SCI-Arc, how do we do something? I have all these ideas for projects.

And I said, you know, it’s really unfortunate you called me today because we’re just launching a three-year program around issues of food, architecture, infrastructure and social justice.  I’m really going to focus our energy on that, can we talk another time?

She said, woah woah woah, wait!  We have a farm, we bought this land to turn it into a sustainable farm and we don’t know what to do with it and I hadn’t thought to talk to architects about it but maybe there’s a way.

I almost fell flat on the floor.  Because here I am trying to generate this project dealing with sustainable agriculture and action around health and food and here comes somebody who lands the part.

And so that became our first project. Subsequently, I’ve gotten involved with the group called Food Commons which wants to bring regional food hubs to Los Angeles, I’m teaching about that right now.

There are cities we’re talking to about helping plan sustainable agriculture here at the office.  So it’s really something that has emerged from this pretty basic interest in engaging the issue.  So here we are today and it’s becoming a part of our practice.

Blooming Rock: The direct relationship between sustainable farming and architecture is not that clear for most people. Can you give a few examples of how they are related?

Michael Pinto: Let’s first accept architecture as a broad discipline that involves the shaping of our environment.  So that includes buildings but it also includes landscapes, it includes infrastructure, it includes urban fabric.

In talking with the groups at Watts, one of the things the groups told me was that Watts was destined for poverty for a long time.

Because we have more groups coming through, more infrastructures coming through Watts without leaving anything behind.  And so our section of the city is sliced and diced, by easements, rights of way, rail lines, utility lines.

It’s hard to dissemble a community or create a nucleus or create locally generated commerce or to even have a center of community. The Watt’s Towers was kind of functioning as that and so do the non-profit providers.

Watts is directly between the Harbor and Downtown LA and there’s probably the entire $25B food economy of the Los Angeles region coming right through Watts without leaving much for it.  Because we know that $25B is roughly the size of the LA food economy, but a very very small percentage, less than one percent is produced locally.

I trace it back to having visions of urban planning that go back to 1939 when GM was developing their Futurama proposal for the World’s Fair in NYC that was advocating for densified urban cores while restricting recreation and farmland to the periphery connected by a system of roads.

So here you have exactly that, a dense urban core that’s bringing food in from further afield, but the problem is that the areas in between at the fringe of the urban core aren’t playing a critical role in the movement of food.

And then how do you generate an urban infrastructure around it?

A poster for a panel discussion on food and urbanism in LA moderated by Michael.

Blooming Rock: I know since you teach at SCI-Arc and you’ve probably thought about this a lot. What advice do you have for up and coming architects?

Michael Pinto: There’s something I won’t claim to have invented, but I’ve been following it myself.  And it was someone at a graphic design conference telling future designers, you’re going to go out, you’re going to look for a job, and the economy is tough right now.

And if you don’t find a job, after some reasonable amount of time, stop looking.  Instead of looking for a job, go do the job you want to do.  In whatever form you can do it.

So that could mean volunteering at the city in their planning department, it could mean starting your own discussion series by rallying people together on Facebook.

It could mean doing beautiful drawings you know you can do, documenting something you feel passionate about.  Whatever it is, right now is a challenging time.

Even we as a business are following this advice, but investing our energy in things that we want to be doing.  I think it’s actually a great time to be coming out of school because I think there is news that things are starting to look better.

As an employer and as someone who looks for students, I would probably much more favor someone we saw doing something interesting, making opportunities for themselves rather than reading resumes that come through my door.

In fact, most of the people who are working in our office are people that we’ve discovered doing something that we thought was really compelling and interesting.  That’s the kind of people we want to collaborate with.