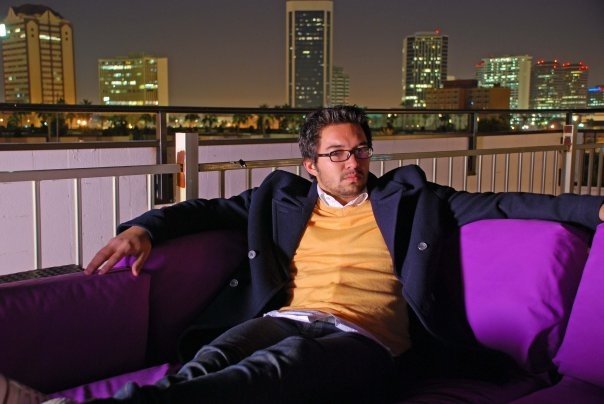 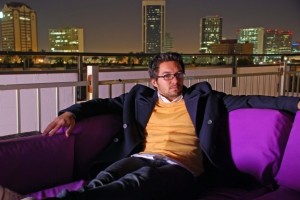 Today’s post is by Keith Mulvin.  I love it when Keith’s kind, smiling face greets me at the Phoenix Public Market and when I run into him at various local events, coffee shops and other hangouts.

Keith G. Mulvin was born and raised in Tempe, Arizona and now lives in Phoenix, Arizona.  He has a Bachelor of Science in Urban Planning from the School of Design at Arizona State University.  He currently works at the Phoenix Public Market.
Keith is dedicated to Phoenix and is being the change he wants to see, with a coffee cup in his hand. Twitter: Keith4President

Last night, I biked up a couple of blocks to Fifth Street, where coffee is served out of a rehabilitated bungalow.  I was there reading until they closed at 12 am.

In the morning, I start my day with a rather unusual problem: Which coffee shop should I begin my day at?

I can walk a block, down the tree lined Second Avenue, to a coffee shop in one of the first shopping malls built in the city, painted yellow like the summer sun. Watching the cars zoom by, I always wonder if people even know there is a coffee shop there.

I can go two blocks up the street to the rail station and catch the next train to Campbell, and get one of the best Americanos in the city. A place whose fame was only glorified when everyone in the world read about it in one that series of New York Times articles, 36 hours in a city.

This morning, walking out of the Knickerbocker apartments, I followed the smell of the roasting beans, a smell that fills downtown, to a coffee shop three blocks up the street from where I live, where another amazing Americano can be found.

Could you have guessed that I live in Phoenix? This coffee shop, like all other independent ones, is a place you only stumble upon by chance or recommended to by a friend.

Whether you need to get through the day, have a meeting, read a book or catch up with some friends, the coffee shop is a perfect place. And, here in Phoenix, you can choose through a handful of these local coffee shops.

I like to call all the familiar faces you get accustomed to seeing part of the Coffee Shop Culture, one of many cultures you can find in our city. However, you have to find it.

And, this is where I would like to begin my story of Phoenix…

Phoenix is the largest city in Arizona, and the sixth largest in the nation.

Arizona was just named the second fastest growing state in the country, a ranking that Phoenix has become comfortable with. However, in terms of an age of a city, we are a relatively young.

After the war, the soldiers of the three military bases around Phoenix; Luke Field, Williams Field and Falcon Field, took advantage of the cheap home loans part of the G.I. Bill, and bought a house.

In 1960, Phoenix was a land mass of 187 square miles, with a population of 439,170 people. Phoenix, being a city that was growing so fast, seemed to be only able to catch up with the rapid population growth. Our city worked in an incremental fashion.

However, since Phoenix saw growth during the automobile era, we live in a city that is a direct product of building around the automobile, this sterile environment.  If you think about it, in twenty years, Phoenix’s land mass and population each grew 1900%!

Now, thinking of great cities around the world; Paris, London, Munich, New York, Chicago, we have this preconceived notion of what a city should be.  One does not have to search for anything, because everything is right there in front of you: srt galleries, restaurants, museums, book stores and yes coffee shops, all within walking distances, all in the center of the city.

But, we have a story of our own.  We are not like Paris, London, Munich, New York, Chicago, nor should we try to be. We are Phoenix; we are not this sort of destination, but rather a journey, a way of life, an experience.

This journey of Phoenix is the path away from the three or five or seven lane raceways, and behind the empty lots, which can lead to the rooftop bar at the Clarendon, where the Flamenco dancers fill the space like Don Bolles and the Phoenix 40 once did, at the Phoenix Public Market, where micro-enterprise gets developed, and a familiar face is always expected, or, at the FilmBar, an independent movie theater that shows foreign films, documentaries and independent movies, while being able to enjoy wine and beer, and an example of adaptive reuse.

What I love about this city is all that is true of Manifest Destiny, the modernization of the west, the air of the pioneering spirit that embodies Phoenix.  Every week I meet people from all around the country moving here, not to just get away from the snow, but to start businesses, to be someone different.

Here people can make a difference, create a legacy to help make our community a better place to live. At my age, with my degree in hand, I can move to an already great city and blend in, but here I can stand out, I can be someone different, and help make Phoenix become great.

And, where we are now, Phoenix has not even reached its plateau, like most other western cities. Our tale is still being told by the whispers of historic buildings, the shouts of glaring glass walls, and by you.