On Saturday I attended the first Annual Bicycle Summit of Phoenix at the Burton Barr Library put on by the City of Phoenix. It was wonderful to hear about proposed bike infrastructure improvements, existing safety and traffic laws, and programs and events concerning cyclists.

It was also a great opportunity for the biking community to get together and be heard. I commend the organizers – City of Phoenix bicycle coordinator Joseph Perez and traffic engineer Kerry Wilcoxon for making a concerted effort to listen to what the bikers of Phoenix need and want.

Although the summit this Saturday was only a first step for making cycling more viable in Phoenix, the very fact that we had one is a huge victory over the past where cycling has been at best on the very back burner of infrastructure priorities or at worst disdained as an annoyance for the “real” users of roads – motor vehicles.

One very promising and exciting proposal that was announced at the summit was a road diet on Central between Camelback and Bethany Home Road.

Kerry Wilcoxon gives us a run down of what this would mean:

Blooming Rock: How would this proposed road diet work?

The technical questions to be answered at this point are how we start and end the lanes. On the north end this will most likely be done by starting and ending the bike lanes at the Bethany Home Road crosswalk and directing bicyclists onto or off of the Murphy Bridle Path.

The south end is more tricky since we could either carry and start the bike lanes south of Camelback close to the METRO station or start them at the signal at Camelback. Starting and ending south of Camelback would probably be better for bicyclists but may not work for the auto traffic through the intersection. 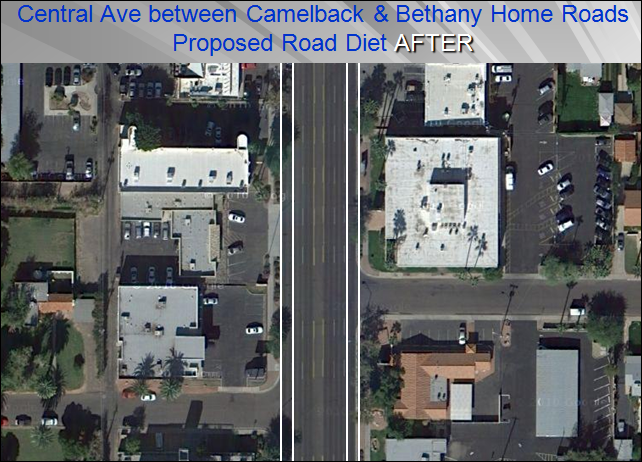 Auto traffic turning right at mid-block locations (non-signalized) would most likely either use the bike lane/buffer or turn from the new outside travel lane.  Both of these scenarios are problematic for bicyclists but to some extent this may be happening now. The bike lanes and buffers will at least provide more visibility and reaction time for both drivers and bicyclists. We will be working these things out over the next few weeks as we develop the design.

If this plan is implemented, auto traffic currently using two lanes in both directions north of Bethany Home Road and south of Camelback would continue to have two travel lanes over this mile long segment. This may help control speed without introducing any additional delay since the Camelback to Bethany Home Road segment is the only portion of Central with three lanes of auto travel in both directions and currently carries about the same amount of traffic as the rest of the of north Central.

As for the timing, of the project, we will submit this for design internally this week and should have preliminary layout sometime in the next 4-6 weeks.  Assuming there are no serious technical issues we will propose the plan to management.

If accepted by management, we would then need to let the neighborhoods on either side of Central know about the change and work through any issues that may come up with residents living in the area.  If no unsurmountable problems come up during the process, we would probably implement the change sometime this fall and then monitor the auto and bike traffic to make sure there are no unforeseen safety problems that arise.

Blooming Rock: How did you decide on this stretch and why can’t it be longer at this point?

Kerry Wilcoxon: We decided on this stretch of Central due to the unique configuration of Central Avenue between Bethany Home Road and Camelback.  As I mentioned this is the only portion of north Central with three auto travel lanes in both directions.

We receive periodic complaints from residents living nearby that drivers on Central use this portion of the street to race between signals for better positions in the cue.  With the Murphy Bridle north, bicyclists could use this segment to get to and from Sunnyslope and the Arizona Canal from the Camelback METRO stop.  We should also be able to make this change without losing auto capacity and without having to pay to obliterate and restripe the entire portion of Central Ave.

Whenever we make a change like this we need to be mindful of not creating new problems.  Removing auto travel lanes can create back ups and more emissions along certain stretches of roads, neighborhood cut-through and risky behavior such as traffic pushing yellow or running red lights.

Blooming Rock: What are some of the benefits you foresee coming out of this road diet?

Kerry Wilcoxon: I mentioned some of the benefits in answer to your first question, but for me the best benefit is that there will now be a direct connection from METRO (Light Rail) into the neighborhoods north of Central and Camelback.  This may entice more people to either bike to METRO or simply to begin biking into Downtown on a regular basis.  I also believe that by doing this, we will improve conditions in the neighborhoods between Camelback and Bethany Home.

Blooming Rock: Where is this proposal in the process of getting implemented in terms of funding, approval and an estimated date of completion?

Kerry Wilcoxon: I answered most of the timeline questions above but as far as funding this is a fairly low cost change since we are primarily talking about removing and then adding paint. Depending on the end treatments, we may need to add a few ramps or signal push buttons but even with these changes, the project will not cost too much to implement.

Photo Credits: Top Photo: the bicycles outside Burton Barr this Saturday at the Summit.  Photo by the author.  Bottom Image: a rough diagram of the proposed road diet, courtesy of Joseph Perez.

What do you think about this road diet?  Leave  comment!