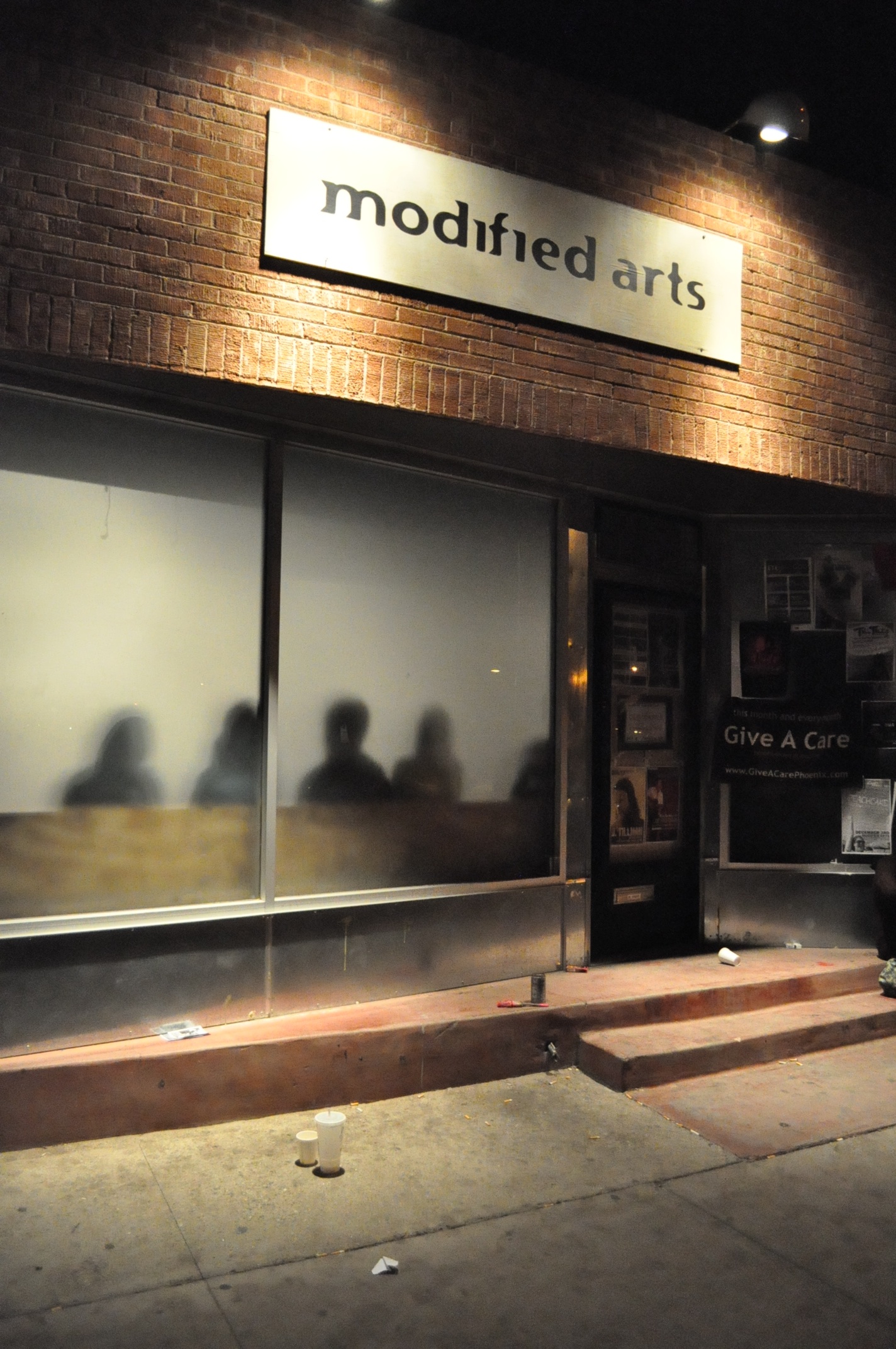 Today’s post is by writer Si Robins, who I got to know watching the Suns playoffs last year at The Duce.  Si is the editor of Downtown Phoenix Journal and a family of green living websites. You can find him riding his bike throughout downtown Phoenix, and drinking too much espresso at local coffee shops. Drop Si a line at si@siwrites.com.

When I was in college, Downtown Phoenix meant entertainment: Suns games, First Fridays and live music. Modified Arts was an icon for us under-agers — during that strange and unfortunate three-year window where you’re away from home but not yet able to successfully enjoy a bar without a sense of paranoia.

Modified booked great and plentiful rock shows, and that’s why kids from Tempe and beyond constantly filled the space. Architecturally, it was rather unremarkable. Last year, I blogged about the building’s history on my weekly blog for Downtown Phoenix Journal, “From the Arizona Room.”

Not to bore you with the details twice, but it was a simple, rectangular bungalow from the 1920s. It showed all the wear a rock venue should: dusty, sunken floors, skunky smells, holes in the wall and layers upon layers of colorful flyers. In essence, it was a far cry from the single-family home it was intended to be when it was built.

The point is that it wasn’t at all about the building. It was what it represented and what it was: a community instigator. It activated Roosevelt Street on random Tuesday nights. Concertgoers would go buy snacks at the gas stations on the corner of Roosevelt and 7th streets. Carly’s was a common stop for a bite afterward. And we could actually get in without the First Friday crowds!

As students living in Tempe (mind you, this was before the ASU’s Downtown campus sprouted up), we didn’t know much about Downtown Phoenix except for Modified. But we were eager to explore its surroundings, considering we spent so much time within its walls.

We discovered .antispace on 4th Street (which has since moved to the Warehouse District) and Fate around the corner on Garfield. We eventually wandered as far west as Grand Avenue, widely assumed to be the slums of the city, to enjoy fascinating places like Fat Cats, the Paper Heart, the PHiX and the Trunk Space. Though only separated by a dozen or so miles, it felt a world away from the Tempe campus.

Today’s ASU students don’t have a spot like we had with Modified. I can’t tell you how many times ASU Downtown students have said that there is nothing to do in Downtown Phoenix. That’s not to say that there aren’t great venues out there that provide all-ages shows. The Trunk Space is still scraping by on Grand, and further north, The Rhythm Room has solidified itself as a go-to spot for many touring acts.

But this type of place needs to exist in the city core. Students from Taylor Place need to be able to walk there. It needs to be near places to eat, places to see a film (ahem, FilmBar… ) and places to congregate.

Empty space in Downtown Phoenix is certainly available, but that aside, it is an incredibly difficult venture to open a music venue. Several people have started initiatives to fill the Modified void after it converted to a gallery space (for the sake of preserving their business plans, I will not mention them by name), but tricky, expensive adjustments are needed on most of Downtown’s buildings to make fire code. That’s before you even begin to outfit a building with a proper stage and sound equipment.

Several have mentioned that the long-vacant 222 E. Roosevelt building would be fantastic, with ample on-street parking available to the north, but yes, “the rent is too damn high.” With a landlord unwilling to budge on price and the financially unstable nature of small rock clubs, it poses a problem.

Since Modified’s alteration, the Living Room has popped up between monOrchid and 222 E. Roosevelt. It’s a little hut of a building — almost an outhouse — and can’t comfortably fit a band and more than 20 people. It’s a good concept to have in our neighborhood, sure, but it will never be able to draw touring acts that will bring a mass of people.

I’ve always thought the Knipe House on 2nd and Portland streets, nearly engulfed in flames about a year ago, could make a great venue if the money was available. The city seems to think it’s structurally beyond affordable repair (and that may be true), but it has great bones, a large common area and spaces to serve food and sell merchandise. Plus, the lot could easily accommodate a large number of parking spaces — something that Modified could never claim.

While there is no easy solution or cheap fix in a time when money is scarce, an all-ages venue is worth producing, and it will go a long way toward building the allusive “critical mass” so often mentioned as Downtown Phoenix’s Achilles’ heel.

Photo credit: One of the last shows at Modified.  Photos by Jason Garcia.