How Phoenix became a City of Freeways and not Rail Transit 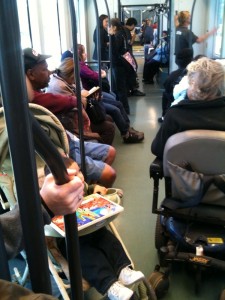 Believe it or not Phoenix was one of the last major cities in the country to complete its freeway system.  By the 1960s Phoenix still didn’t have many freeways other than the 1-17.  Starting to learn lessons from other parts of the country, especially LA, many in Phoenix weren’t sure that adding freeways would be a good answer to our people-moving dilemma.  “…by the later 1960s, people in many cities were beginning to see that near total reliance on the automobile for transportation imposed significant unanticipated costs.  Many people now regretted the decisions to bulldoze older neighborhoods that resulted in the physical isolation of downtowns, the loss of affordable housing, and the disruption of minority populations.  Because Phoenix moved slowly to implement its plans, by the time it was ready for serious right-of-way clearance, many citizens were having second thoughts” writes Bill Collins in his book The Emerging Metropolis: Phoenix, 1944-1973.

A huge debate ensued about whether Phoenix needed a freeway system.  By 1970, we had virtually no public transit because of the failure of the free-enterprise bus system.  To address these issues, a new group was formed called Citizens for Mass Transit Against Freeways.  “They criticized the way the city had favored the automobile against any alternative that it had boxed itself into a position where freeways were the only possible means of relieving increasing traffic congestion” says Collins.  But unfortunately, there was already huge momentum behind building freeways led by City Manager at the time, Edward Hall.  Hall believed that freeways were “the most modern, most efficient” means of getting people from one place to another and that they gave people “complete freedom of choice”.  We can’t blame Hall for his utopian vision of freeways as opposed to the old system of rail-based transit.  He wanted what was cutting edge and new for Phoenix.  But in his excitement, he ignored the cost of this “modern day” transportation scheme, a cost that was not lost on the freeway opponents of the time.   A lot of people criticized Hall’s biased dedication towards the private car and his opposition of transit, including the Phoenix Planning Commission of the time.  But somehow he was able to get his freeway construction plans approved by Mayor Driggs and the council.

Freeway opponents would have been completely ignored were it not for an important ally in their cause, Eugene Pulliam, who owned the Arizona Republic.  “For some years, Eugene Pulliam had been warning against a freeway that would cut off downtown and his papers have surprisingly positive and extensive coverage of freeway opposition” Collins explains.  But alas, when Pulliam died in 1975, the freeway opponent movement essentially died with him and freeway construction was pushed through once again resulting in a city of freeways instead of a city of rail-based transit.

But the tide may be turning once again towards transit, although we have a very steep hill to climb.  The Light Rail, as David Bickford pointed out in one of his comments to my post yesterday, has been tremendously successful already and there are plans to extend it all across the Valley.  The freeways have done their damage, cutting off downtown from the suburbs instead of acting as connectors, having already destroyed neighborhoods in its construction, and facilitating the asphyxiation of urban life through sprawl.  Has the Light Rail come too late or is there still time to correct our past mistakes and start looking at the urban development of our city not soley through the eyes of traffic engineers by through holistic lenses that include livability, the environment and sustainable economic prosperity?

Photo Credit:  Photo of the Phoenix Light Rail on November 2010. Photo by the author.