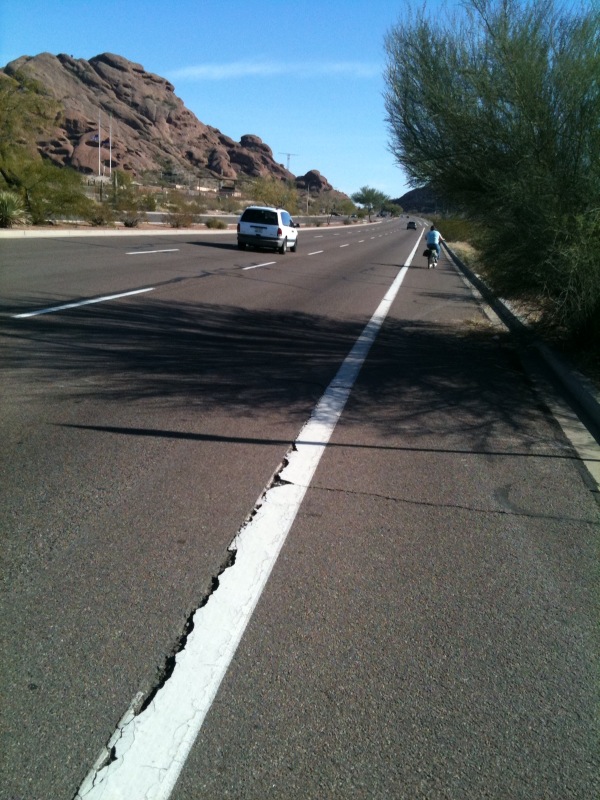 How Far has Phoenix Transportation Come since 1974? 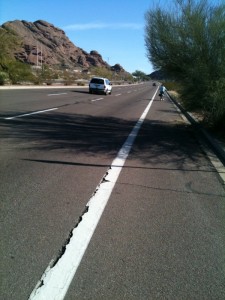 Well, not very far.  We may, in fact, have taken a few steps backwards.  While I was doing some research for another article I’m writing, I ran into a very telling story written by Pam Hait called “Transportation” in the August 1974 Phoenix Magazine.  Below are two excerpts from it that I found fascinating:

“Bicycle paths also made giant strides as Scottsdale, Tempe and Phoenix all initiated bike-only paths and lanes.  Cities now request that developers build adequate room for bicycle paths into their subdivision plans.  Bikers converged on Phoenix City Hall this year, and made the most of the bike-only streets on Sundays.  Scottsdale, Phoenix and the Salt River Project are cooperating on topping a portion of the Cross-Cut Canal, which will be a loop of the Papago Park recreational bike trail.  Bicycles are now considered as alternatives to cars, and a sign of the times was the folding of many gas stations, with locations subsequently re-opening as bicycle shops.  Pedalers are finally coming into their own.”

“Still the federal government’s attitude should be examined more closely.  It is reluctant today to put money into new transportation systems, but it was never reticent to fork over funds for automobiles.  The private care is, by far, the most heavily subsidized form of transportation ever invented.  Detroit might build the bodies and the engines, but who lays down the streets?  Cities like Phoenix have intensified the problem by spreading out and extending never-ending roads to accommodate more people.  This is an expensive and inefficient solution which is finally being questioned nationally.  In ancient times, the cry was heard: “My kingdom for a horse.”  But as Mustangs and Pintos and the like clog our cities, it’s obvious that the Kingdoms have been overrun.”

OK, first, gas stations folding and turning into bicycle shops? Really?  Unthinkable in today’s world.  I suppose what Ms. Hait was writing about had everything to do with the oil embargo of 1973.  But I suppose we “recovered” from that and the multitude of energy crises we’ve had since then and the gas stations have once again taken over the landscape.  Bicycle shops are just now rearing their beautiful heads again in Phoenix.  And I’ve heard people talking about the bike-only streets in downtown, that Central, for example, used to be closed to cars on Sunday so bikers could congregate and use the road instead.  How lovely it would be to reinstate these bike-only Sunday roads, maybe not on Central where the Light Rail is, but elsewhere in town.  I know a ton of people would show up.

Second, it sounds like we knew what the problems were – sprawl and our “auto”-cratic culture – more than 35 years ago.  What happened?  Why didn’t we learn our lesson back then and start changing our ways?  From the looks of things now, cycling has been largely relegated into a fringe, impractical, leisure-centric mode of transportation and the private car has continued to be heavily subsidized.

What will it take for us to realize that the future lies not in the private car, but in cycling, walking and transit, not as a passing trend, but as the very thing that will ensure our future at all?