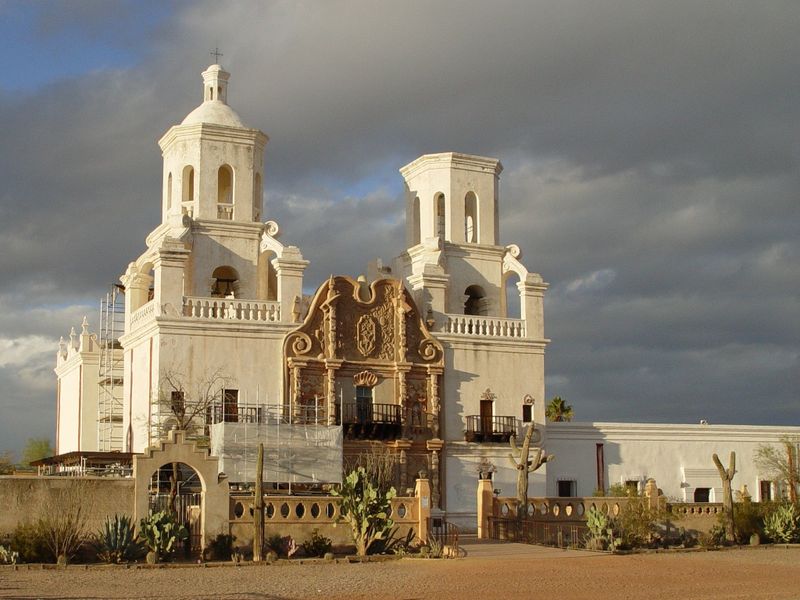 Will Native American, Hispanic Cultures Be Included in the Arizona Centennial?

Today’s post is the third and final installment of my interview with the Executive Director of the Arizona Centennial 2012 Foundation, Karen Churchard.  If you missed them, make sure to read part I and part II of the interview.  In today’s post, we find out how the Native American and Hispanic populations will be recognized and included in the Centennial, how we can all participate, and finally why the Centennial is coming at such a good time.

Blooming Rock: How are the tribal communities going to be included in the Centennial?

Karen Churchard: On Centennial Way, we’re doing a tribute to the counties and the tribes.  We’re working with them to identify what the placard or marker is going to be.  It could be a seal or some kind of marking where you could walk up to it and read about the tribe itself.  (The text would be derived from) a series of questions you ask each tribe and county, so all the information, as you read it, would have the same look and feel.  But there’s the question of what if the tribes want to add more to it, would they be able to?  That’s all in discussion.  They (the tribes) have been very receptive to that (the markers on Centennial Way).

For the Centennial Best Fest, the three events that we’re holding in Prescott, Tucson, and Phoenix, we’re coordinating with Tribal Tourism on building an Indian Village.  We would work with them to have representation from all the tribes.  (We’re doing it) in Phoenix for sure, but they don’t want to be taking on too much.  The Prescott and Tucson (Indian) Villages might be smaller, more of the southern tribes in Tucson and the northern tribes in the Prescott.  The goal in Phoenix is to have all 22 (tribes) represented.

Blooming Rock: Are there any efforts to showcase or include the Hispanic population in any of the events?

Karen Churchard: We’re doing 3 Villages at Best Fest. One is Native American, one is Hispanic, and one is Western.  We’re trying to show the 3 major cultures that shaped Arizona.  And we’re also doing 6 Pavilions, which will be smaller, but the same kind of concept, where we want to talk about the future of Arizona or where we are now.  There might be a Sports Pavilion, a Renewable Energy Pavilion, as well as Arts and Culture and that type of thing.  You’ll have a standard street festival where you have artists and craftspeople, music and entertainment, rides and all this stuff you’d think would be at a street festival, but we’re adding these Villages and Pavilions and a main stage.  We’re hoping to entice national entertainers that have a tie to Arizona to come and perform at the different events.

Blooming Rock: Where is the Phoenix Best Fest going to be?

Karen Churchard: It will be Downtown.  We haven’t done the footprint yet.  The other thing we’ve been talking about is doing a motorcycle ride, with Copper Chopper being a mascot, and we’re giving that bike away through a drawing the weekend of the Best Fest in Phoenix.  With that being the big moment of who wins the bike, we want to get motorcycle enthusiasts from inside and outside of Arizona to ride in and to celebrate our Centennial.  So the bikes would be parked on Centennial Way.  If we get the number of bike riders that we want, you could just walk down the street and look at motorcycles if that’s what you want to do.

So that (Centennial Way) will be a secondary part of it, but we’re thinking 7th Avenue to Central Avenue (for the Best Fest). It almost might be an L-shape because we want to involve the County Court Tower, the new one they’re building.  They want to do a series of tours so people can see their new facility.  We want to incorporate the historic Courthouse and hopefully they’ll have their (Justice) Museum done by 2012 which is the old jail. We want to incorporate Cityscape, so that’ll definitely be in the footprint.  The new Court Tower is on Madison I think, it’s further south, and the historic Courthouse is on Washington and Central so (the footprint) could be an L-shape, we don’t know yet for sure.  But it’ll definitely be in the Downtown area.

Blooming Rock: How can people participate and get involved in the Centennial?

Karen Churchard: What we’ve been saying all along is that our goal in the organization is to hopefully get all the communities, all the counties and all the tribes to participate in a way that’s meaningful to them.  It’s interesting because a lot of people just keep saying to me, tell me what you want us to do.  I don’t know anything, for example, about architecture, or historic preservation.  So what kind of project would the community who does love architecture or historic preservation want to do to showcase what they love and what they’re passionate about in a way that’s meaningful to them and could bring a better awareness to other people?  For example, I didn’t know we had these magnificent homes and buildings (in the state). Some people say we don’t have architecture in Arizona.  San Xavier Mission, for example, I’ve read is one of the most magnificent pieces of Spanish architecture in the country.  I didn’t know that until I got involved with the Centennial.  It’s a perfect example of how to use this moment in time (the Centennial) to celebrate our past, where we are today, and where might want architecture, for example, to go in the future.

My message is really that anybody can get involved.  I know there are groups that are doing projects that have not been sanctioned with us. People ask me, do we have to be sanctioned?  The answer is no you don’t have to be, but how are we going to know about you if you aren’t?  If you tell us, we can promote it and push it back out there.

Blooming Rock: So if there’s a group that wants to be sanctioned, what do they do?

Karen Churchard: They go online, arizona100.org and there’s information on Legacy Projects even though that’s not what we do.  We’ll give you information on how to contact the Historical Advisory Commission.  If you want to do an event, same thing, you go online, you can actually fill out a form, and then it’s a pretty simple process.  The application is not really challenging but it does ask how you’re going to fund your project. We want to make sure we’re sanctioning something that’s really going to happen. So if you do apply, you have to show that your project is viable.  And if you do that, it’s a pretty simple process to get approved.

Karen on why it’s the perfect time for the Centennial: People have been talking about (the fact that) the Centennial couldn’t have come at a worst time because of the economic factor.  But I’ve been saying all along, I think it’s a good time.  It’s time for Arizona to be prideful and (for Arizonans) to look at their state in a way they are proud of it.  I didn’t say that at this Council meeting, but at the end of the Council meeting, the Mayor and a couple of other Council members made comments and all of them said that the Centennial couldn’t have come at a better time.  Yesterday I had a meeting with about half of our board because we have a lot of fundraising to do in a two year period and our co-Chairman, Bud Jones, great man, retired Chief Justice of the court system was kind of reiterating the ‘woe is us’ (theme).  We don’t have any money, we’re really behind, it’s just going to be really hard to raise money and so on.  At the end I said, everything you said is true, but I really think that in the next month, we’re going to see the Centennial become a rallying point.  I think it’s really going to make people be stronger about who we are.  It’s going to come at the right time, money aside, it’s not all about money.

Blooming Rock: Do you think the recent tragedy in Tucson is going to actually rally people to be more involved in the Centennial and more prideful of our state?

Karen Churchard: I think it’s certainly an unfortunate event.  It’s tragic and sad.  But I think that this is not going to define us.  We’re sorry that this happened but we’re proud of our state, we’re proud of the people here.  So I think the Centennial is here at the right time.  It’s not because of the Centennial, but I think there’s been unfortunate things that have been showcasing Arizona in a negative way in the political world.  But now you have the Centennial and now we can talk to people about what’s good about our state.  That’s one of the things we’re trying to work on is trying to have a branding and an identity and speak to Arizonans about who we are.  And so we’re going to have a series of advertisements, we’re doing a campaign that says that Arizona is dAZzling, we’re using the AZ in words, like trailblAZer, stargAZer, amAZing.  To that point we’re going to try to show what is amazing about our state and our people by using some iconic images and really start getting people thinking about all that we have to be proud of.