What the City of Phoenix is Doing for the Centennial 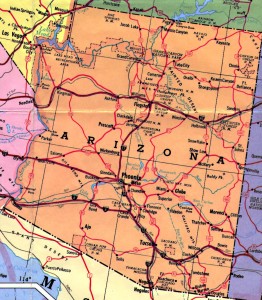 Today’s post is part II of my interview with Karen Churchard, the Executive Director of the Arizona Centennial 2012 Foundation regarding what the State is planning this year and next for our Centennial.  If you missed part I, make sure to catch it here.  I’ll be posting the third and final segment of the interview tomorrow.

Today’s installment is about the events that we can expect to see this year in anticipation of the Centennial and also how the City of Phoenix, specifically, is planning to participate.

Blooming Rock: What are some of the things that are happening now for the Centennial?

Karen Churchard: Well right now we’ve started sanctioning these (Signature) Events and one of them that’s technically our first kick-off event is February 11 (2011).  The (Arizona) Historical League is doing it and it’s the Historymaker’s Gala.  They’re showcasing 58 historymakers they’ve identified over the past about 20 years.  They’re doing oral histories on them, a video, a book, and that night will be more of a celebratory event.  We’re planning our countdown to the Centennial on February 14th of 2011, our 99th Statehood day.  That day, down at the State Capitol, we’re going to have an event for the media and for the public to come and see.  All the Legacy Projects and the Centennial Events are invited to come and have a table, almost like an expo.  And then we’ll be doing a series of public announcements.  We’re hoping to have a Countdown Clock in the (Executive) Tower.  We’re waiting on final approval from the Department of Administration on that.  So there’ll be a clock in the Governor’s tower that counts down the days (to the Centennial). And we’re going to do the groundbreaking of Centennial Way that day.

The big project that we’re pushing right now is the Centennial Penny Drive.  We’re working with the schools and have asked them to sign on and make a commitment.  We’re asking every child to raise a hundred pennies for the Children’s Legacy Project which is to clean the Capitol Dome.  And if we raise extra money, we’ll actually endow some of that money so that 10 or 20 years from now we can go back to that fund and have money there to hopefully keep it clean for a (long) period of time.  It should be cleaned at least every 10 years, and from what I understand it was last cleaned in 1995.  So we’re way overdue.

We have other events that you’ll see that start in September.  Our main focus, event-wise, will start in September and go through February of 2012. We’re not doing a lot of events.  We’re doing our Best Fest event, which is our signature big event that’ll happen in Prescott, Tucson and Phoenix, so we’re doing it three times.  Each place will have a different look and feel to it I think.  That’s our main event.  And then the Copper Chopper is our current motorcycle.  The motorcycle is traveling the State right now.

Blooming Rock: In terms of the City of Phoenix, since we’re the capitol city, what are some of the things we’re doing to lead the Centennial?

Karen Churchard: The City of Phoenix has pulled together a group that is working with us (the State) on the Centennial.  In terms of what they’re doing that’s separate from the (Centennial) Commission, I don’t believe they have any plans yet.  A lot of it has to do with the economic times.  A lot of the cities and towns are saying they don’t have the money.  So we’ve been out for the last year encouraging cities and towns saying you don’t have to do something in and of itself (for the Centennial).  Take some of the events that you already do and make some part of it a little bit more unique or special so that it can be an official Centennial event and it has a Centennial component.

A good example is the City of Peoria.  They went and they looked at what events they had.  They picked four events, they’re going to do one a quarter starting in March of this year and ending in February of next year.  Two of the events they are creating for the Centennial and the two events they already have, they’re changing the theme (to have a Centennial component).  So they’ve got four events they’re doing over the year and they’re done.

And I just met with Fountain Hills two nights ago, I went to their Council meeting.  Whether or not it happens, their goal is to have 100 events.  They’re trying to reach out to all their community/non-profit groups and their own parks (department) and saying, if you’re an automobile club, why not have a 100 mile event, or do some kind of an event, special for the Centennial.  If they can get that traction, they may (be able to) say that their celebration is 100 events over a year’s time.  That’s a lot!  But it doesn’t mean that the city is doing them all themselves.  They’ve just organized their agencies, their non-profits, their community groups to come up with a 100 events.

So it’s really up to the cities to decide.  Even I’ve been talking to cities about planting groves of trees in a sustainable way.  And if you’re already planning on greening your communities, then why not plant groves of 100 trees and simply put a plaque out there that says City of … planted these 100 trees in honor of the Centennial and you’re done.  Actually Kingman, Fountain Hills, Mesa and a few others have signed up to do just that.  I think Maricopa County’s doing it and I talked with their Flood Control PIO person and after my presentation she told me that they actually plant trees from seeds. When they plant the trees during 2011 and 2012, they’ll just start naming them Centennial groves.  That’s an example where it’s not going to cost them a dime other than a the cost for a plaque.

Blooming Rock: I hope the City of Phoenix comes on board and does something special because we’re the State capitol.

And they’ll be partners with us, they already are.  For example with the Centennial Way, they had to come up with the 6% (matching funds) and be the lead on the project.  They know that the Best Fest we want to do will be a huge footprint in Downtown Phoenix and we’re going to be seeking some services from them.  So it’ll be a joint effort.  But to your point, whether they identify their own events, and I know that’s what they’re planning on doing, they just haven’t yet.  They’re just right now starting to do that.

Blooming Rock: Who’s the person at the City of Phoenix that would be in charge of that?

Karen Churchard: Jane Morris out of the City Manager’s Office is the person.  My understanding is that they (the City of Phoenix) brought her in, which is interesting because it shows their commitment, to the City Manager’s office specifically to organize the Centennial. (They brought her in) to work with us, the Commission, to work with the (Phoenix) Street Transportation Department on Centennial Way, to kind of be an advocate, if you will, for the different departments and the Commission in moving this forward.

They (the City Manager’s Office) have just recently, in the last couple of months, gone to the (Phoenix) Heritage Commission.  I presented to them and showed them what we were doing and they designated the Heritage Commission to be the Centennial group (for the City of Phoenix).  So instead of making a separate committee or commission specific to the Centennial, they’re using an existing commission.  That group will be another group that will start getting involved once they start hearing and knowing what neighborhoods, agencies, and departments of the City (want to do).  They’ll sort of be the clearing house (for other groups to participate in the Centennial).  Barbra Stocklin, who’s the Phoenix Historic Preservation officer, works with the Heritage Commission, so she’ll be involved as well.  She’s been involved with the Centennial Way.  She “gets” it.  Because it’s hard, you have to take into account every facet of what you want to do.

Stay tuned to part III of my conversation with Karen coming tomorrow!

Leave a Reply to February 14, 2011: Arizona’s statehood is 99 yesterday; next year is The Centennial | Unobstructed Views