What’s the Best Location for Phoenix’s Next Dog Park?

Today’s post is by Sean Sweat who’s posted on Blooming Rock before making a case for a dog park in downtown at the former location of the Ramada Inn.  After a disappointing result from a City of Phoenix public hearing approving a vast asphalt parking lot there instead, Sean has come up with an exciting new idea for a dog park in Downtown.

Sean Sweat, aka @PhxDowntowner, is the Treasurer of St Croix Villas in the heart of downtown and an MIT-trained transportation professional.  His professional focus is supply chain & logistics.  His personal focus is pedestrianism, public transit, and multi-modal interactions.

Phoenix’s newly-formed Ad Hoc Dog Park Committee has an opportunity to make a major impact to downtown’s pedestrian activity, vibrancy, and quality of life – and for relatively little money.  Pedestrian activity makes our downtown more attractive to developers, businesses, and current & potential residents, while increasing the quality of life and eventual ability for more and more downtowners to go car-free, which is the real tipping point that we are gunning for.  Pedestrian traffic also provides much-needed support for today’s small businesses pioneering downtown and doing everything they can to weather the worst economic storm in 80 years.

One thing that has the ability to have a major pedestrian impact in our downtown is a dog park.  In short, this dog park – if put in the right place – while not a silver bullet, will be a building block of an economic engine for the City of Phoenix.

Sound crazy?  I’m an engineer and like numbers.  So let me support my above claim and educate readers on what site has the most potential, using data and inductive logic to dismantle some misguided arguments that I’ve heard against a downtown dog park.

Myth #1 – “No one lives downtown.”
First of all, everyone seems to define downtown differently.  Luckily we can avoid defining the downtown population, and thus avoid the pitfall of defining the downtown boundaries, by instead simply analyzing the number of people living within walking distance of the best potential dog park site available: 775 N. 1st St., which is a one-acre, City-owned, underutilized ASU parking lot between Matt’s Big Breakfast & Sens/PastaBar (presented in green on the map below).  For simplicity, let’s call it our “#DTdogpark” for the rest of this post.

The fact is that most people don’t seem to comprehend just how much denser good urban developments are compared to single family housing.  Example: I’ve said before that we need to make sure that the park serves the residents south of Roosevelt.  In response, I sometimes receive hurt looks and am told that “There are LOTS of people living north of Hance Park that want to be able to walk to a dog park, too.”  The problem is these people don’t realize just how many people actually live downtown.  Let me make the point visually: 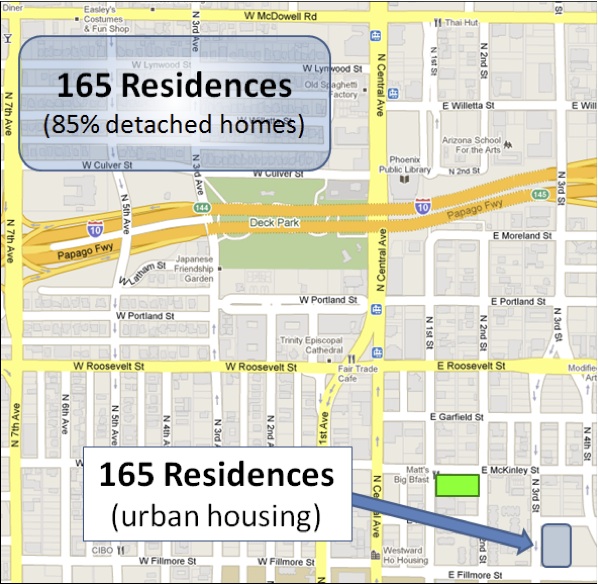 Hopefully the contrast in that map indicates to you why it’s so easy for non-downtowners to not notice the downtown residents: urban housing doesn’t use obvious swaths of land the way detached homes do.  In fact, that small urban housing block pointed out above is only half of the Alta Lofts building.  They actually have 330 total residences.  Once we map out all of the residences within walking distance of our #DTdogpark, as you’ll see soon, we find over 2000 residences.
(Note that I’m not including the 1200 ASU students living in the dorms!)

But what does 2000 really mean?
If we were to completely fill up that same “walking distance” with nothing but detached homes, how many residences would we have? 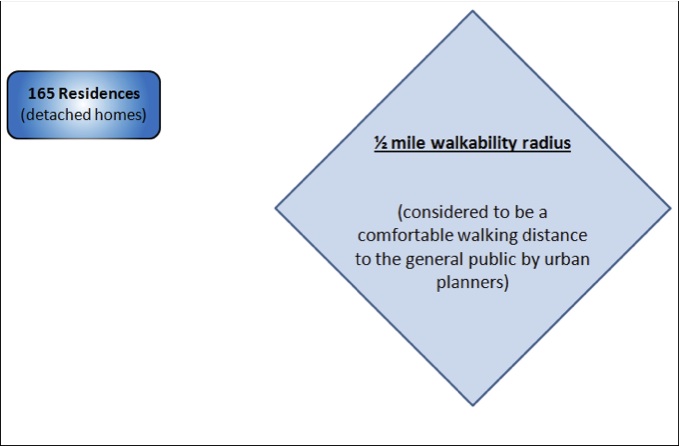 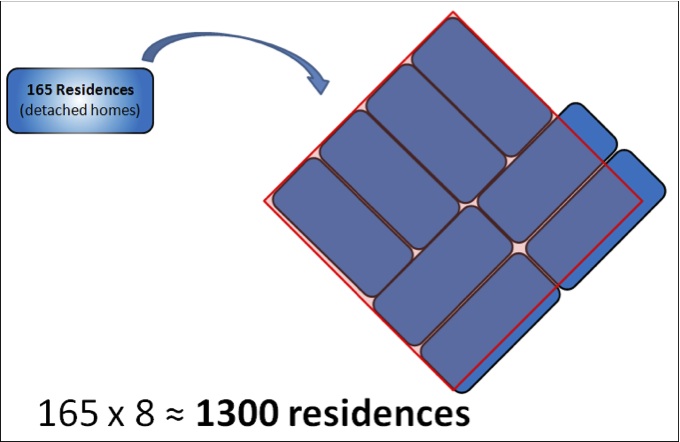 The conclusion we can draw from this, is that despite the widely believed myth that no one lives downtown, centralizing the dog park in our downtown core will serve MORE residences than you could serve almost anywhere else in Phoenix!  In addition, due to the opportunities for development in our downtown – which has the most development potential in all of Phoenix due to the centralized location, light rail access, vacant land, and urban zoning ordinances – this is also the best location for a dog park in terms of catalyzing future growth.  In summary, it’s the best dog park location when you consider both where people live today, and where people will live tomorrow.

Myth #2 – “People in apartments/condos don’t own as many dogs as people with yards.”
The national average holds that 40% of households own a dog.  This is more than supported by another data point that says that there is 1 dog for every 2 people in Phoenix.

So I called as many leasing offices downtown as I could to ask them what percentage of their residents had dogs.  Whenever I got more tangible answers than: “Huh? I got no idea”, the responses were akin to “50%”, “60%”, even “80%”!  (That last one seems high to me, though a resident living there did tell me once that people in that building without dogs feel like outsiders.)  To be very conservative, however, I still just assume the national average of 40%, which when applied to 2000 residences indicates that we have over 800 dog owners within walking distance of our #DTdogpark!

The City of Scottsdale operates a 4-acre dog park on Chaparral and spends about $80,000/yr maintaining it.  In comparison, our #DTdogpark will only be one acre.  Adjusting the normalized cost up a little bit for some loss of economies-of-scale, we can reasonably assume that our #DTdogpark will cost ~$25,000/yr to maintain.  So that’s our target.  The following are three ways that we can cover this cost.  (The best solution will likely use two of them.)

Community Volunteers
Evans Churchill, Roosevelt, Garfield, and Midtown Museum are the four most proximal neighborhood associations.  The Orpheum Lofts and Monroe 44 HOAs don’t fall within any neighborhood associations, so we can approach them separately.  The goal here is to use community volunteers to lock/unlock the park each day, do a daily walk-around for damage, and refill the waste bag dispensers – saving a significant amount on labor costs.

Sponsorships
Our #DTdogpark is a premiere advertising opportunity for the many businesses in the immediate area or which are dog-oriented.  Collecting $25,000/yr in sponsorships in exchange for advertising space is an easy sell.  Trust me; with virtually no effort, I already have $2,700 on deck. 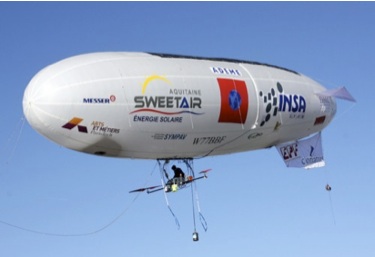 25¢ Entrance Fees
No one considers a quarter to be unfair and it could cover the upkeep costs.  (Entrance fees are not uncommon for dog parks.)  It also dissuades transients from squatting in the park.  But I didn’t pick 25¢ arbitrarily – I calculated how many trips we should expect to our #DTdogpark, and then calculated how much the fee would have to be for that volume of trips to cover the cost of upkeep.  The result is a mere 25¢: I calculate over 100k trips to our #DTdogpark each year.  For comparison, Scottsdale’s 4-acre dog park gets ~350k visits/yr, so my result seems very reasonable.  Here are my assumptions and calculations if you want to double-check me: 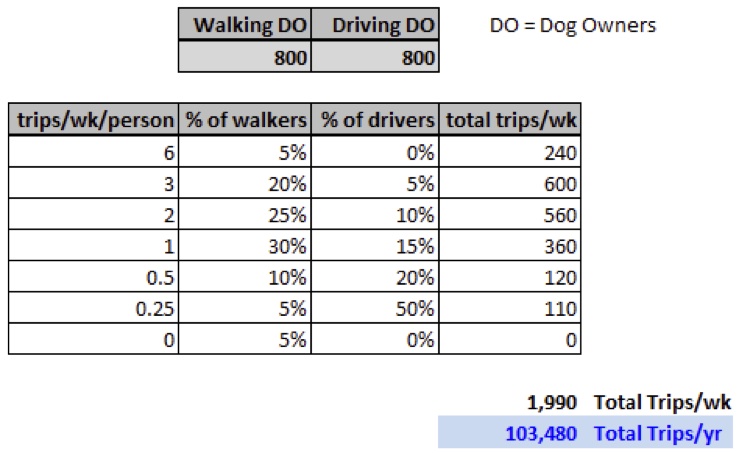 Myth #4 – “A full acre is too much land.”
This would actually be the smallest dog park in Phoenix (though Tempe has some that are much smaller).  Also, based on all the numbers I’ve shown you above, our one-acre #DTdogpark would have a slightly higher physical use rate (paws/sqft/day) than Scottsdale’s.  If we make it smaller, it would be impossible to maintain because the paws/sqft/day would skyrocket.  An acre also allows us to create a split park – one area for large dogs, and one for small dogs.  (Tangent: Dog parks can also be split into active/passive areas, which many people I talk to seem to prefer over the large/small option.)

Those last three points deserve more explanation, because they are VERY significant and haven’t been covered yet.  People complain about downtown feeling dead after 5pm.  Streets without pedestrians feel uninteresting and unsafe, especially after dark.  This is especially true for ASU students, which is a demographic that we need to be coaxing out into our city rather than making them feel like they have to hide in their dorms at night.  Therefore, any opportunity to create traffic along particular pedestrian corridors should be exploited.  The 200 daily pedestrian trips that I calculated above (reverse engineer that table above a little bit) are pedestrian trips that will be channeled down very visible and meaningful corridors; meaningful because dozens of small businesses lie along those corridors.

Use the following three maps to see the number of urban residences (blue) served by different site locations (green), the pedestrian corridors each location will strengthen (yellow), and the small businesses that benefit from those pedestrian corridors being stronger (red).
Note that multiple small businesses might be contained within any single red box. 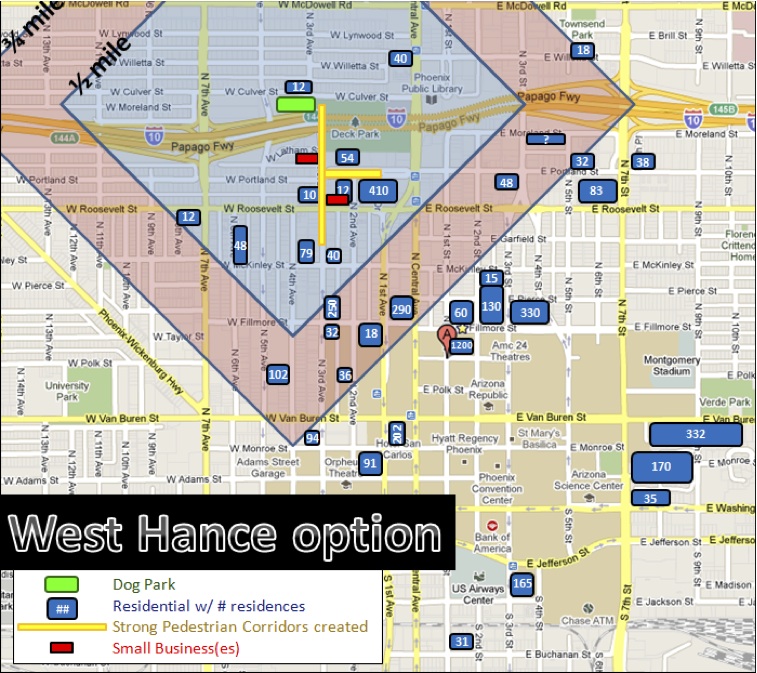 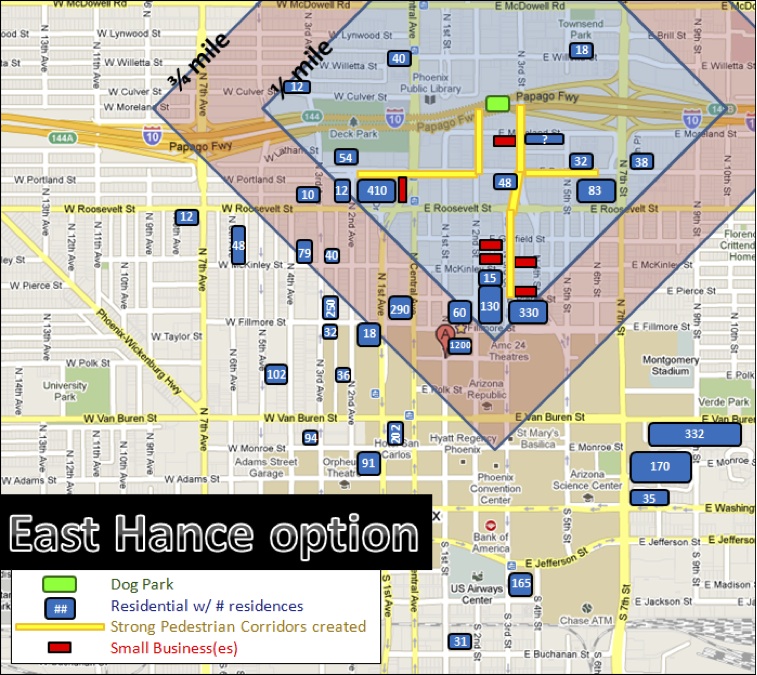 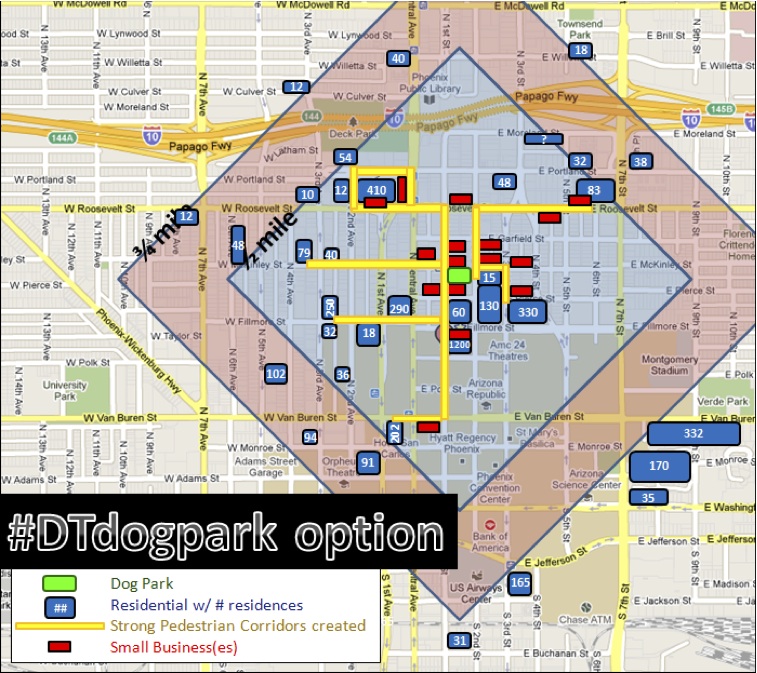 It’s obvious from those maps which site creates more pedestrian activity on the streets, and which site also serves as an economic engine: clearly the #DTdogpark site in Map 3.  Now also ask yourself, “Which of those three sites would excite potential developers more?”

Myth #6 – “What about the parking for ASU students?”
The newly rubber-stamped-despite-massive-community-outcry 90,000 sqft asphalt parking lot for the Sheraton Hotel just south of ASU’s Taylor Place dorms will be used, but not all 232 of the planned parking spaces.  The City owns the Sheraton’s parking lot, so the City has the power to commit the northern-most 20 parking spaces of that lot for ASU student parking.  Problem solved. 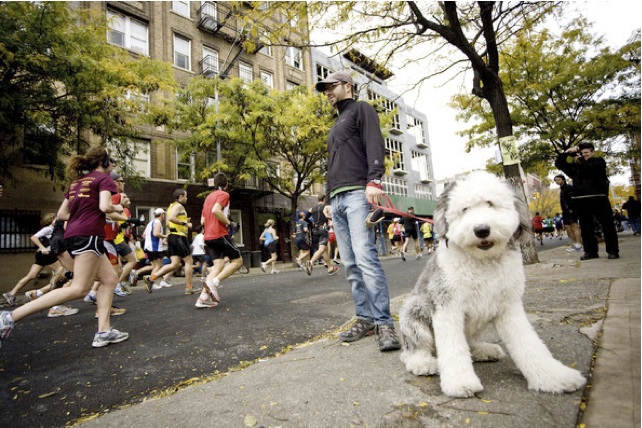 Conclusion
The best location for Phoenix’s next dog park is at the #DTdogpark location.  That location serves the most people, provides the most environmental and health benefits, best strengthens small businesses (which the City should read as “increased tax dollars”), and creates something meaningful and visible that both developers and visitors will notice.  Hopefully you followed my ideas and logic in the sections above and realize that, if we are able to succeed in getting this urban dog park built on that asphalt lot, our downtown will be significantly healthier and improved, on many levels.