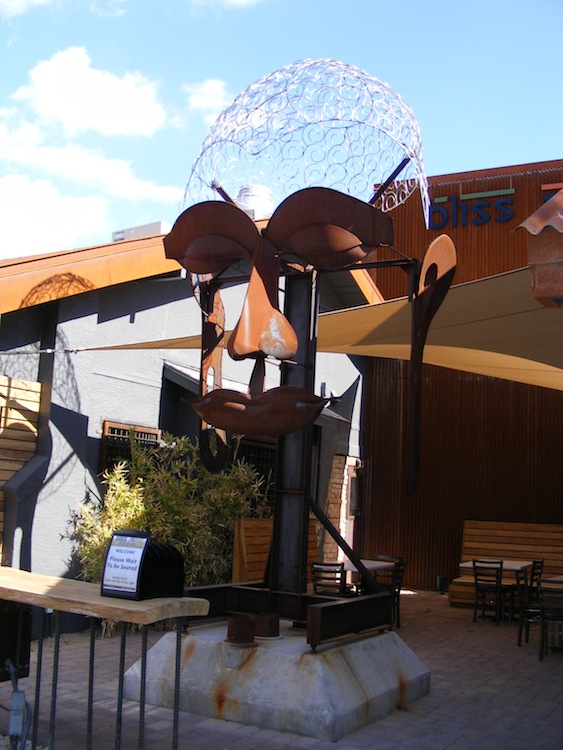 A Design Review of Bliss ReBar

The Layers of History

I remember going to Fate when it was fairly new about ten years ago with my friend Rocco Menaguale, who turns out is the architect with triArc Design and Architecture that did Bliss.  The current Bliss complex is composed of four buildings, three of which are historic homes built in the 1920’s.  The fourth, building G, is a newish corrugated metal building that connects the three buildings.  Building G was actually built during the time when Fate was in play.

Johnny Chu, the owner of Fate did some pretty remarkable things with this little corner.  For example, he hired architect Andy Pulsipher (an apprentice of Al Beadle’s) and artists Nathan Ward and Pete Deise to do the awesome renovations of the patio and the exterior of buildings 905 and 901.  To help get your bearings straight, building 905 is currently the restaurant portion of Bliss ReBar and building 901 is the bar part of Bliss ReBar.  One thing this team did was to replace the roofs of the old buildings with metal roofing manufactured by a local Phoenix company Steel IQ.  The metal roofs made the inefficient buildings much more energy efficient.  This is what else they came up with: 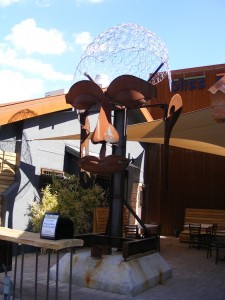 The awesome buddha sculpture out front, which in a way is an achilles heel to the all-American Bliss ReBar, but was a godsend for Nine|05 and of course, perfectly appropriate for Fate, both Asian restaurants.

This is what else the Pulsipher/Ward/Deise team did, they added the wonderful wrought iron art that doubles as architectural elements, like this great steel lattice on the front door of the 905 building:

And this gorgeous organic iron nest in front of the door and windows of the 901 building: 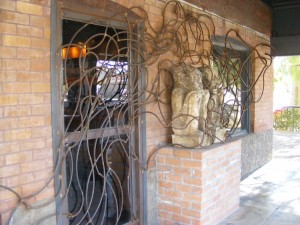 And not to mention these transcendent branches of steel on the underside of the roof deck in the 901 building: 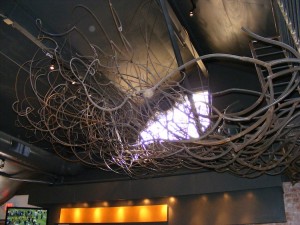 Plus, how could we forget the wonderful tree of life that is the outdoor bar in the complex: 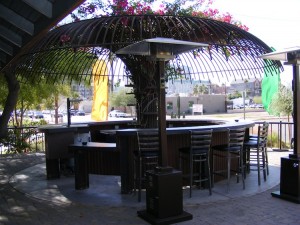 All these wonderful steel elements that give the place it’s personality and unforgettable quality were in place before Nine|05 was a glimmer in Matt Carter’s (chef of Nine|05) eye.  So what did Matt Carter’s crew do to contribute to the design of the complex?  They basically pimped out the interior of the 905 building.  They added these wonderful wide steel frames to the interior of the windows: 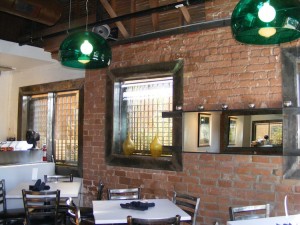 And made a fun common sink area with an aqua-marine mosaic tile and wood planks reminiscent of Asian design: 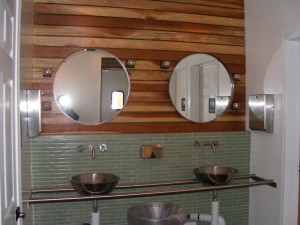 So here’s the crux of my design review of Bliss.  It’s really a culmination of the vision of different owners and designers. It’s impossible to review the design of Bliss without also taking a look back at all the design elements that were put in place before.

In March 2010, Nine|05 closed.  What they left behind was a lovely interior renovation of the 905 building and unfulfilled dreams for the 901 building and building G.  They had planned on opening 2 other eateries out of those two buildings, one a gastropub and one a taqueria.  Unfortunately, these plans never came to fruition.

So what was left were four empty buildings on a critical corner of Downtown Phoenix.  What happened next was really a saving grace for this evolving but currently empty spot.  Mark Howard, part-owner of the hopping restaurant Fez and partners Jackson Kelly and Kevin Kelly recognized the opportunity here and decided to revamp this previously Asian cuisine hot spot into an American eatery and bar.  What they had on their hands were buildings that had some really great design elements in place, but that were never really tied together into one cohesive concept.

This is where my friend Rocco and the firm he works for, triArc come back into the picture.  They had the unenviable task of pulling the buildings together conceptually in a way that would work with the new American restaurant concept and to tie up the many loose ends that were left behind by the two previous owners.  One of the major obstacles the owners and the architects of Bliss ReBar faced was that there was an existing permit for the 901 building and building G from the Nine|05 days.  But this permit had expired and it was for much more extensive work than what Bliss had in mind for the space. The Bliss plan of attack was to make the 901 building into a bar and use the first floor of building G as storage and office.  The permit in place was for a kitchen in building G and two new restaurants in the two buildings.  Mark Howard told me that the feat of reactivating the permit and integrating their new, less complex plans was a gargantuan one.  The City of Phoenix Development Services Department had no idea how to handle this never-before-attempted situation.  After many trials and tribulations along with some very helpful people in the City such as Building Code reviewer Ken Alexander, Bliss ReBar got their permit but opened three weeks later than expected.

The biggest visible design impact TriArc and the owners of Bliss ReBar have had on the complex is really on the interior of the 901 building, or the bar building.  This building was completely unfinished and was a little bit of a mess before Bliss and triArc came in and breathed life into it. They finished the bar into something that is lively and functional: 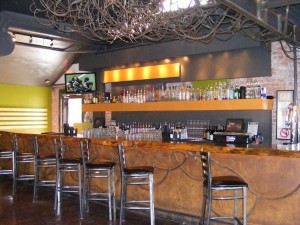 They refinished the gorgeous wood slab that is the bartop, which was existing, but needed some TLC: 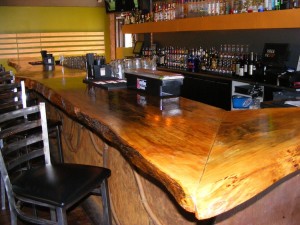 Also a fun element that the team added is the great big graphic on the bathroom wall: 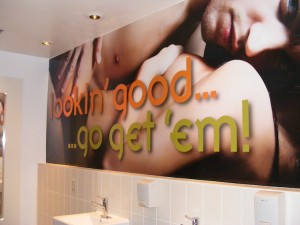 While it may seem as if all the big design elements were in place before triArc and the owners of Bliss ever came into the picture, these guys have made a huge contribution into making all the existing elements actually work.  Without what Bliss did, we would have an interesting but defunct little corner on 4th Avenue and Roosevelt.  Bliss took the grandiose dreams of Matt Carter and the funky artistic whims of Johnny Chu and made them into a financially viable reality, using what was there and making it into a cohesive new restaurant concept.

What I find most interesting about this little complex that is now called Bliss Rebar is that it is adaptive reuse at its finest and most complex.  It has both a long history, i.e. the three houses originally built in the 1920’s, and it’s near history, where it was reused and renovated first by Fate, then by Nine|05 and now again as Bliss.  And the best part is that these layers of renovations have all successfully built upon one another.  None of the owners decided to tear down what was there before.  They were smart enough and design-savvy enough to recognize a good thing when they saw it and found ways to build on what was there.  It’s a great example for Phoenix and I hope that it’s repeated again and again all over Downtown and beyond.