ASU and the City 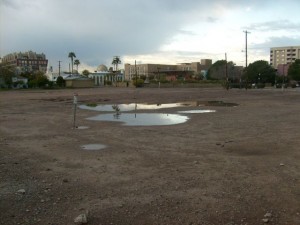 Today’s post is by J Seth Anderson, a fantastic writer, journalist and fellow urban advocate for the Valley.

Seth (first name is John, but he has always gone by Seth) is not a Phoenix native but dang close! His favorite time of year is summer in Phoenix. Seth lives in a mid-century house in downtown Tempe although he lives and breathes downtown Phoenix historic preservation and development. He writes about downtown Phoenix, historic preservation, politics, and LGBT issues on his own blog Boy Meets Blog. Seth also writes for the new Downtown Phoenix Journal magazine debuting this Thursday, November 4! He is an ASU graduate and has two beagles, Beau and Lacey. Lately, he’s done nothing but play Angry Birds on his cell phone.

I’ve spent all of my life in the southwest with most of my growing up years in suburban Phoenix, Arizona. I was 18 years old when I first visited a real city, a city that was dense, walkable, and urban with active communities with healthy neighborhoods, a real sense of place and importance, and a place where being a pedestrian felt normal, not abnormal. In the suburbs of Phoenix I was never able to walk or bike or bus to a museum, or the movies, or restaurants, or theaters, or civic events. Those amenities were located miles away from the family cookie-cutter McMansion and always required a car. Low density sprawl and near total dependance on a car were normal facts of life and were all I knew for nearly 20 years. Public transportation like trains or subways or walkable city streets were mythical creatures, like unicorns.

Like many Phoenicians I ended up at ASU as an undergraduate. During my years at ASU I was able to travel extensively and visited many remarkable cities that opened my eyes to what Phoenix was lacking. I loved my time at ASU, but one thing I loved the most was the freedom I had living near campus and living almost car free. I loved the simple freedom of being able walk (or bike) around a beautiful campus that was built to a human scale. The iconic Palm Walk, while at times congested and busy, felt exciting. ASU is dotted with a healthy mix of historic buildings like Old Main (dedicated in 1898) which proudly faces the new and ultra modern Fulton Center across the street; the only adobe building on campus, the Moeur Building built in 1939, is a stones throw from the newly renovated Memorial Union. Former dormitories with their stately columns are near newer dormitories that house hundreds of students who live on campus, study on campus, and hang out on campus. There are restaurants, theaters, music halls, a bowling alley, a grocery store, a drug store, a doctors office, a gym, tennis courts, parks, emerald green grass, hundreds of towering trees, libraries, a bookstore, a live snake exhibit (!) and coffee shops. There is always an electric energy on campus where life is buzzing nearly every hour of every day.

After graduation I bought a house nearby and still bike around campus as often as I can. I thought I was just sentimental about my years at ASU, but while cruising down Caddy Mall on my bike it hit me: I am drawn to ASU campus because it is an urban city in microcosm.

Somehow this method of building cities has been ignored in the actual municipalities that surround ASU. What if our elected officials guided city growth and development in the same way the main ASU campus is built, with a focus on pedestrians, not cars, with an appreciation for Arizona’s past by allowing historic structures to co-exist with new construction instead of demolishing buildings in the name of “progress” while also encouraging development of housing in a more central location so people could live near places of employment and enjoy the benefits of walking or biking to work.

My friends ask why I stay in Phoenix. The answer is simple: because I love it and someone has to be on the frontline advocating for the things that will make Phoenix great.

Photo Credit:  Photo by the author.