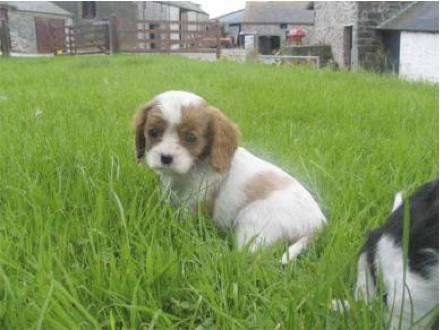 Today on Blooming Rock we have a special Friday post by Sean Sweat about future plans for the Sahara Motel site that is slated to become a parking lot, but Sean has a better idea. Sean Sweat, aka @PhxDowntowner, is the Treasurer of St Croix Villas in the heart of downtown and an MIT-trained transportation professional.  His professional focus is supply chain & logistics.  His personal focus is pedestrianism, public transit, and multi-modal interactions.

St Croix Villas needs your help.  If you like any of the following things, you’ll want to help us:

If you’re still with me, then continue on to see how you can very tangibly improve all four of those things right now by helping us get a dog park in downtown.

I know some readers know the Sahara Hotel’s sad story as Blooming Rock has blogged about it numerous times, but new readers don’t.  Therefore, if you are already quite familiar with the topic, skip to the asterisked paragraph.  Otherwise, continue below.

In February of this year, the City of Phoenix purchased an entire downtown block containing the old Sahara Hotel.  The City currently plans to pave the bulldozed site into a 90,000 sqft (2 acres) surface parking lot for the exclusive use of the privately-owned Sheraton Hotel and a news organization.  Then, when ASU has the funds for a new law school in “3-5 years”, they plan to build it on this site.

So you just heard the punchline of chapter one: the City tore down the four-story Sahara Hotel.  The Downtown Voices Coalition and a number of residents and advocates fought diligently to try and write a different ending to that chapter – wanting to preserve the building itself for various reasons.  In the end their focus shifted to at least preventing the City from obtaining a zoning permit to turn the land into a massive surface parking lot in the center of our downtown.  But in the end the City, rather than the people of Phoenix, controlled the end of the chapter.

*Everyone assumed that this was a one-chapter book.  However, St Croix Villas, a residential community 300 ft from the land in question, of which I’m a member, filed an appeal of the zoning decision.  So began chapter two.

•    Most downtowns have 2-3 parking spaces per 1000 sqft of office space.  Phoenix’s downtown has 5.  The City will and has given excuses, but it’s still a fact that we have no shortage of parking in our downtown.

•    The City’s expectation to build the law school in “3-5 years” is empty posturing.  Our economy is tanked and our budget problems, which have been a major issue in 2010, are actually forecasted to get significantly worse in 2011 and 2012.  Whatever happens to that land now, will be there for a long, long time.

•    The reason the City, and more accurately the Sheraton Hotel, wants a parking lot is simple: revenue.  The Sheraton currently charges $17 to park all day in its garage.  So when the Sheraton has events and their garage fills up, they want to be able to tell the nice people from Paradise Valley and Apache Junction that the next closest parking is this new lot they just built and only costs $12!  Because currently they have to direct those people to an existing two-acre parking lot just 300 feet further that charges only $5 (privately owned).  As I write this at ten o’clock at night, that parking lot has all of 3 vehicles surrounded by 250 empty spaces of dead land.

“Okay Sean – *yawn* – how much harm can another parking lot really do to downtown?  Why all the time, effort, and money spent to fight something that the City government has already promised its corporate bedfellows?”

A massive parking lot really has no adverse effects in suburbia where the only effective mode of transportation is an automobile.  However, there are three very real reasons that a parking lot is severely detrimental to a downtown – especially one just getting off the ground after decades of neglect and mismanagement – such as ours.

1)    Parking lots trap solar energy and slowly discharge that energy as heat throughout the day.

This is formally called the Heat Island Effect.  It has been noted in all major urban areas, and Phoenix is notoriously the most dramatic in the nation.  According to which study you happen to be reading, many of which come from ASU, Phoenix’s urban core suffers from temperatures 5-12° hotter than it would under natural conditions. 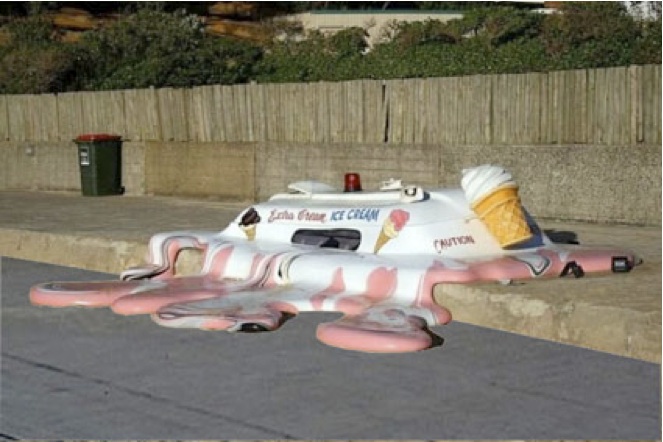 During a time when our leaders should be exploring ways to alleviate this semi-avoidable problem, they are instead planning massive parking lots and making a bad problem worse.  The City says that they will provide 7% shade cover via some scattered trees; that leaves 93% of the asphalt to cook us alive.

This is formally determined by what are called four-step models, which are the conventional method of transportation forecasting.  I have reason to believe that no one in City Hall, and especially the Community & Economic Development department which is pushing for this massive parking lot, knows how to perform one of these – yet they are making transportation decisions.  One element of the four-step model is a mode choice calculation.  The “mode” of someone’s trip could be walking, cycling, driving, or using transit.

Part 1:  Primary Loss
By increasing the parking supply, the City will be directly inducing more trips by car.  This is because when the City increases the supply, they will be lowering the cost as measured by a combination of both $ and convenience (and parking will become more convenient).  When they lower the parking cost, they increase driving demand.

This will be borne out by people deciding that parking is easy enough that they can drive downtown rather than use transit.  More cars will also result from people not putting in as much effort to carpool.  Those are both examples of mode choice shifts.  But it is also expected that this cheaper parking will generate new trips downtown (via automobile), again piling more cars into downtown without adding a single pedestrian.

Peggy Neely (City Councilwoman for District 2) proved right here on Blooming Rock just days ago that she understands this concept of mode shift very well: “We have to encourage people to ride transit and if we have lots of parking lots and it’s very cheap … they will pick the car every time … we need to encourage parking to be (more expensive) or you’re not going to get the cars off the street.”

Part 2:  Secondary Loss
Safety is a major factor in whether pedestrianism is an attractive mode or not.  Safety for a pedestrian means two things: “Will a car kill me?” and “Will a mugger kill me?” 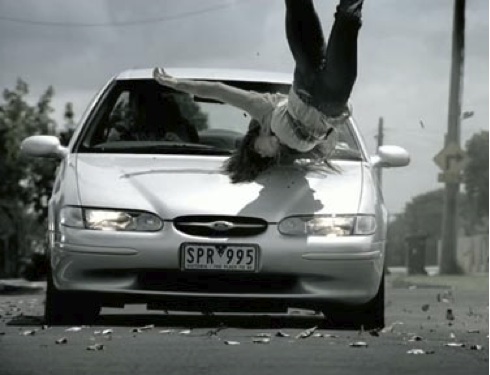 Will a mugger kill me?
Well, that depends on how many pedestrians are out walking the street.  If you’re alone on a street, no matter how lit, it feels unsafe whether that’s true or not (and it very well might be).  More pedestrians on the road equate to pedestrian safety.

You can see the X in the right column of the chart above.  Those are lost pedestrians due to a mode shift.  By losing those pedestrians, pedestrianism becomes less safe (real or perceived).  This leads to less comfortable pedestrians and more pedestrians lost outright.  (The trips might shift to another mode, or they might be foregone completely.)

3)    Pedestrianism will suffer from parking being closer to the Sheraton.

Currently, overflow visitors to Sheraton events, which are the primary intended users of the City’s massive proposed parking lot, park at some distance from the Sheraton.  This distance is nothing egregious, and Americans could stand to walk a few extra steps these days.

As alluded to in the previous section, these mini-trips on foot improve our ped-to-car ratio (i.e. cars become less likely to use people as speed bumps) and increase the pedestrian presence (i.e. Crazy Joe won’t shiv you for your chewing gum).  Mini-trips on foot are also taken by the people using the light rail.  If the City gives these event-goers curbside service to their destination, eliminating these mini-trips, then it further harms our ped-to-car ratio and pedestrian presence. 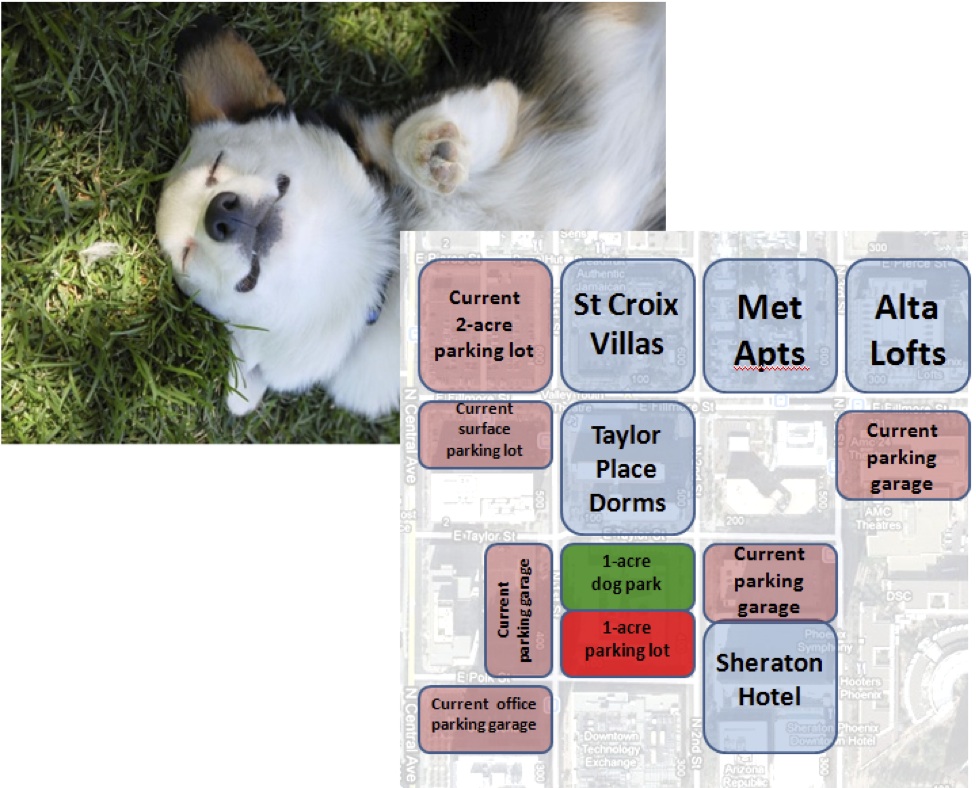 They can pave a parking lot on the southern half of the site.  That should afford the City about 120 spaces.  On the northern half would be a grassy dog park.  We’ll even let people in, too.  My calculations identify 500-600 current households within a half-mile (a comfortable walking distance) that would use this dog park.

This acre of park space helps ameliorate the heat island effect, especially near Taylor Place, a 1200-student residence.  Also, since the dog park would subsume half of the parking that the City wants to create, all of the negative effects that we listed above would be reduced (we’ll assume by half).

This dog park takes it even further though, because we would create a focused and significant pedestrian destination, which is something that downtown sorely lacks today.  First Street is the most focused pedestrian area of downtown, and this dog park would be a meaningful nexus on that street.

The result is induced pedestrian trips that would re-balance the ped-to-car ratio and replace the pedestrian trips lost by the event-goers’ mode shift to cars.  All-in-all, the dog park would neutralize the negative impacts of the adjacent parking lot; not to mention the community that dog parks build.  (Talk to any city’s parks director and they’ll gush about the community benefits of dog parks.)

Quickly, I also have to bring up how this would cast downtown in a very different light.  This would be a downtown park that would actually get used, which is in stark contrast to Civic Space Park or Hance Deck Park.  People love dog parks and, without one, downtown is undoubtedly missing out on potential residents.  A suburban dog owner interested in moving downtown might be dissuaded when they see there are no dog parks and they would no longer have a yard.  A quote from Valerie Porter on twitter when I asked who would be interested in a downtown dog park: “I’d be more inclined to live downtown if there was a central dog park. The one at Papago Park is a big neighborhood meetup.”

While the City would need to fund the creation of the park (it can simply use the planned asphalt costs for that half of the site) and probably a portion of the maintenance costs, I am working to raise private funds from pet-oriented businesses to cover most of the maintenance.  Such a business having their name printed on a sign in the dog park is the most effective and targeted marketing possible.

My point is, this compromise improves the community and downtown while the City and the Sheraton still get some of what they want – and it’s possible. 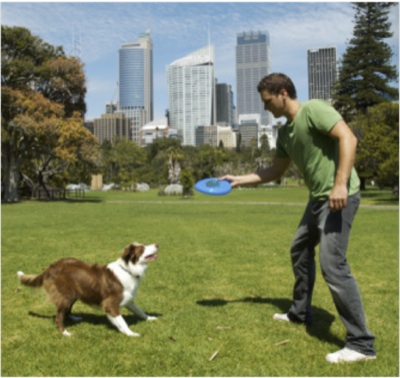 Our appeal will be heard by the Phoenix Board of Adjustments on Thursday, November 4th, noon at City Council Chambers (round building at 200 W Jefferson St).