“Bruges is a biking city” declared the woman at the information counter at the train station when we arrived from Brussels.  I found out first hand that she wasn’t kidding. Biking is an integral part of the infrastructure in Bruges, which is a tiny city in Belgium that has gotten a few big things right.  And one of those things is their bicycle culture.  Right from the get go, when we walked out of the train station, I saw a sea of bicycles parked outside:

The woman at the information counter would later tell me that locals bike to the station, park their bikes and take the train to work.  Naturally, when I saw the Rent-A-Bike sign outside the train station, it dawned on me that the obvious way for me to experience Bruges was to bike it. 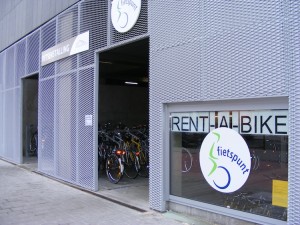 To tell you the truth, I was a little apprehensive about riding a bike in an unknown city, having recollections of how difficult it is to bike in Phoenix, particularly for newcomers who don’t know that you shouldn’t risk riding on the road on most major streets and should keep to the sidewalks instead.  My friend at the information counter assured me that it was safe and that bikes could ride both ways on the streets whereas cars were only allowed to go one way.  My fears were allayed right away once we started on our bikes and arrived at the first intersection and I saw this: 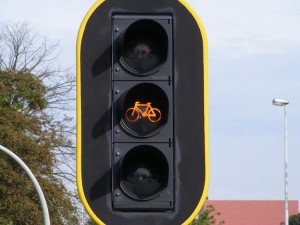 They had a traffic signal specially for bikes!  And as far as bike lanes, well, on the fringes of the center city there were some fantastic bike lanes paved in special red pavers, about as wide as a Phoenix sidewalk, around five feet.  In the center city, things were quite cramped and there were no bike lanes, but I felt no less safe as a biker. That’s because bikers share the road equally with the cars. What I mean by that is, they are considered as important as the cars are.  This might seem strange because a car goes fast and is, well, bigger and stronger and could take a biker out no problem.  But it’s not a matter of physical brawn (like when an SUV muscles a Smart Car around), it’s a matter of assigned importance.  Bikers have as much clout on the roads as the cars do.

As we made our way through the center city with our bikes, we somehow headed off to a nearby suburb of Bruges.  Even in this “suburb”, biking was encouraged, expected, and easy.  I was charmed to see this sign along a canal indicating that this was a place for pedestrians (families in particular) and bikes, no cars allowed: 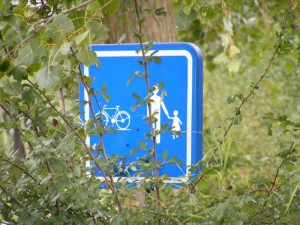 Granted, Bruges is a biking city probably out of necessity.  They have tiny roads:

And their infrastructure dates back to medieval times.  It was one of the few cities in Europe unharmed by the war.  It turns out bikes fit in well into a medieval city.  So can we really blame our very modern city that was built in relatively modern times for being designed around cars rather than bikes?  I suppose not.  But it’s not a matter of why we have such poor infrastructure for bikes.  It’s a matter of positioning ourselves for a sustainable future and our car-centric model just won’t cut it.

I’d like to see biking become an integral part of the infrastructure in Phoenix, not just an afterthought.  One thing I heard from a city staff member at one of the public hearings I attended recently is that the bike lanes in our neighborhoods are not really designed to transport bikes.  No.  They are designed to slow traffic.  So even the little bike infrastructure we do have is really designed for cars.  And often, when speaking to members of the City Council, I’ve found that biking infrastructure is way way in the back burner in terms of priorities.

If Phoenix wants to become the greenest city in the country, or even really be considered a green city by people who aren’t just blowing hot air, we’re going to have to make biking infrastructure a main priority.  One encouraging move forward is the approval of the Bike Boulevard which is essentially a bike path connecting important destinations within the city using signage, striping and some traffic signals like HAWKs (High-intensity Activated crossWalk). The Bike Boulevard, while it may not be the answer to all of the difficulties facing bikers in Phoenix, is an important first step in asserting the presence of bikers in the city and making room for them on our roads.  The hope is that the Bike Boulevard will encourage more people to ride their bikes to get from one place to another, instead of just for recreation, and this increased demand will then bring forth a improved infrastructure for bikes.  Without a viable bike infrastructure, our very modern city might seem antiquated compared to a medieval city like Bruges.

Tell me what your thoughts are, leave me a comment!

Photo Credit:  All photos by the author unless otherwise noted.

Leave a Reply to The Metropreneur