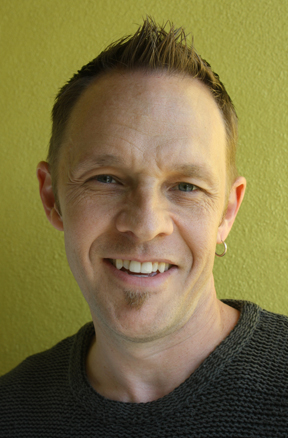 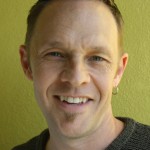 Continuing this special week of guest posts from a handful of the best writers and thinkers in Phoenix, today’s post is by Peter J. Wolf.  Peter is a Lecturer in the Herberger Institute for Design and the Arts at Arizona State University, teaching courses in both industrial design and visual communication design. When he’s not teaching or taking on freelance writing projects, he blogs about feral cat issues at Vox Felina.

I’ve heard it said from people involved with historic preservation that the greenest building is the one you don’t need to build (a message apparently lost on those responsible for the demolition of the former Ramada Inn downtown . More often than not, the topic is adaptive reuse of commercial space—but of course, it’s no less true of residential properties: there’s something to be said for (re)using what we’ve already got.

Density, too, plays an important role in the greening of our cities. Some urban areas—in particular, those with steep real estate prices—have understood this for years. Phoenix, however, is only now coming around (sort of).

It seems to me, then, that the various mid-century condominium complexes quietly lining the streets of central Phoenix are a largely overlooked option for style-conscious eco-urbanites. (I’m sure the calculus is more complex than we care to imagine, and somebody knowledgeable in such matters would likely point out, say, that the energy losses associated with 40- or 50-year-old windows and doors become significant enough over time to offset some of the benefits. This is a topic for another post—by another blogger.)

Can I Learn to Live in a Condo?

Now, condos, townhouses, patio homes, and the like (I still don’t know what distinguishes one from the other—here, I’ll simply use the term condo generically) aren’t for everybody. When I bought mine, I saw it as temporary, grad school housing. Nine years later, I’m in no hurry to move—mostly because the low-maintenance living suits my busy schedule (the leaf blower, weed whacker, and all the other implements with which I once ruined my weekends have lain dormant all this time).

Of course, some people want more than a living room wall separating them from their neighbors. Although I’ve been fortunate in this regard, there are no guarantees. In fact, while I was doing “fieldwork” for this piece, I encountered a 70-something couple who had taken it upon themselves to—rather than take up a hobby or help out at one of the local charities—monitor their community for bloggers with cameras. (That property is not included in the list below, by the way, as I gave them my word I would not—no matter the temptation—share my ill-gotten treasure.) I don’t know that I’d want to live next door to these Sheriff’s Posse wannabes; on the other hand, they do keep an eye on the place.

Many central Phoenix condo complexes are easily overlooked; often, what makes them distinctive is not a flashy façade, but what’s on the inside (which is, by the way, where we live). This relative anonymity tends to keep prices down, especially in the current housing market. Then, of course, there’s the satisfaction of discovering what everybody else has missed: one of the great unknowns.

Listed below are just a handful of these gems. Some, I know well; others, I’ve admired only from the street. There are plenty of great properties that weren’t included simply due to lack of time, or because they’re well known. And, there are undoubtedly others I don’t even know about—which is where you, the Blooming Rock community, come in. Post a comment with your suggestions for other great unknowns. 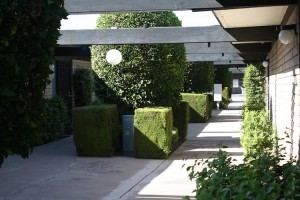 This small, understated community of slump block units is east to miss (or confuse for a dental office, maybe). The 300 sq.-ft. atrium and skylights aren’t immediately apparent, nor is the fact that CPW won an award from the American Institute of Architecture in the mid-sixties.

Caribbean Gardens is actually hard to miss, with its inviting stone-lined central walkway (leading straight to the pool) and a massive sign whose letters suggest a decidedly casual atmosphere. Unfortunately, I’ve yet to see if the interiors live up to the promise of the exterior. 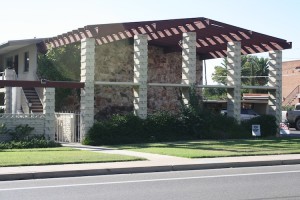 I know next to nothing about Manor House, other than what I’ve seen from the street and during a brief walk through the property. Still, first impressions can be—as in this case—lasting ones. Given its location, materials, and style, it’s hard to imagine there isn’t some connection to Taliesin West.

The Olympus (northwest corner of Maryland and Central) 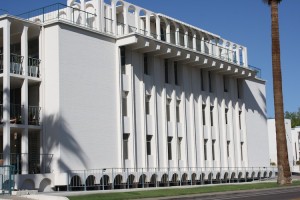 The only time I’ve been inside The Olympus was for an estate sale—in a unit so cluttered with stuff, it was hard to take in the architecture. I’ve been told the top-floor is the place to be, that the vaulted ceilings actually follow the scalloped profile you can see from the exterior. 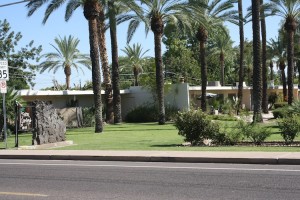 “Quaint” might be the best word to describe Palm Gardens. Built in the late 1950s, the condos are small—only about 750 sq. ft.—but feel considerably larger because of the lush landscaping just outside their sliding patio door. And, if my memory is right, there’s a corner fireplace straight out of a Shag painting. 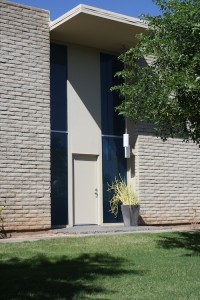 These are large (nearly 1,800 sq. ft.) two-story condos, each with a rear wall of floor-to-ceiling glass and its own patio and pool—surprisingly luxurious amenities given Roman Roads’ inscrutable, somewhat imposing slump block façade. Its location on a dead-end stub of Maryland is an added bonus. 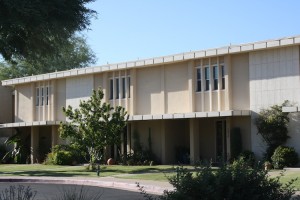 This is an usual complex in that the condos nearest to 20th Street (done in the vaguely Spanish/Southwest style so common in Phoenix) are very different from those at the west end of the property, which are much more mid-century modern (as is the adjacent pool). These prized two-story units are spacious, and include a large atrium.

Photo Credits: All photos by the author.