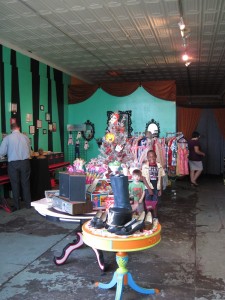 This Saturday the 25th is going to be the 2nd Annual Grand Avenue Festival hosted by the Grand Avenue Merchants Association (GAMA).  Two women in particular have been the heavies behind putting this event together, Beatrice Moore and Kate Benjamin.  Beatrice owns nine buildings on Grand and Kate has her studio, ModernCat Studio, in one of Beatrice’s buildings, the old Braggs Pie Factory. Both are active members of GAMA.

I had the chance to sit and talk with Beatrice this Saturday at her Kooky Krafts Shop.  I’ll let you in on a secret about her.  Beatrice’s unwavering commitment to Grand Avenue and her grass-roots revitalization of the area is going to be in the history books for our children and grandchildren to read about.  She is one of the key people in our midst that is a huge difference maker, someone who (if future generations have their heads on straight) will probably have a street, a park or a library named after her. Without Beatrice, we would not see the resurgence we are seeing on Grand Avenue.

She and her partner Tony moved to Grand and bought the building where they still live today way back in 1992.  Here’s why she said she moved to Grand: “We liked the neighborhood here back then, there were a lot of little bungalows, it was a very multi-cultural feeling, there was a large Latino population in this neighborhood.  We liked that.”

Today we know Grand as an Arts district.  But Beatrice was the genesis of that.  She used the storefront windows of her building, her home, as “changing display windows”.  She had different artists do art installations on these windows, sometimes she would do her own installations, and she very gently inserted the element of art onto the scene on Grand.  It was an unobtrusive gesture and a conscious one at that because she knew that many of the people living on Grand didn’t feel comfortable walking into a gallery. With her changing display windows, they could experience art without ever having to step into a gallery.

Since then, Beatrice has come to own a few more buildings on Grand and she has intentionally developed them to be geared towards small mom and pop businesses and artists.  She disagrees with the concept of developing Downtown to cater exclusively to well-to-do people with over-priced condos and lofts.  Instead she points out that “A lot of people who want to live in the older parts of Downtown and historical areas of Downtown, a lot of them don’t generally have a lot of money necessarily.  People who’re attracted to that kind of environment usually want something that’s funkier and like to build mom and pop businesses and that type of thing.”  No wonder developments that look like they belong in north Scottsdale, such as CityScape, don’t seem to attract many of the locals.

One of the great things about the Grand Avenue Festival is the Re-Dapt Tour that Beatrice has spearheaded.  One of the buildings on the tour she’s very excited about is the Oasis Motel.  This building is being adaptively redeveloped into housing for musicians and artists.  Although the original plans for the building were to build expensive lofts on the site, the depressed economy actually woke the developer Tim Spraig to the realities of what people want and need in Downtown and now the project is mixed-income residential.  Plans of the building will be unveiled during the tour and it’s bound to be a very exciting project.

As a person with a vested interest in Grand, Beatrice is excited about the example the redevelopment of the Oasis is going to set for other developers coming into the area.  She pointed out to me that the Desert Sun Motel was a different story.  The developer of that project got the site rezoned for a mid-rise.  In other words, plans were very likely to raze the building and build something more dense and ultimately overpriced on the lot.  Ironically, the economy saved the Desert Sun from this dubious fate and the buildings have been rescued, waiting to be revitalized.  Beatrice, along with others, is hoping the Oasis project will set a precedent for someone to come in and reuse the Desert Sun buildings and turn them into something fantastic.

One of the great things about the Re-Dapt Tours is that they will give you a glimpse into the insides (both in the physical and historic sense) of the buildings.  Beatrice pointed out to me that most people drive by the buildings on Grand and because they don’t seem very special on the outside, they dismiss them.  But, she tells us, “The real pleasure and joy is going inside these buildings.  People haven’t had a lot of money to fix up the outside of their buildings, but you walk inside and it’s the community spirit and the small retail uses and you get the vibrancy once you step inside some of these places. They’re almost hidden because the outside doesn’t look that great, but inside there’s neat stuff going on.”

The Re-Dapt Tours will feature guided tours of 5 buildings: 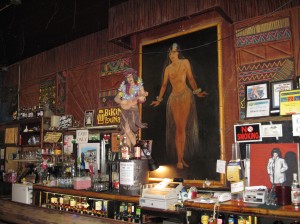 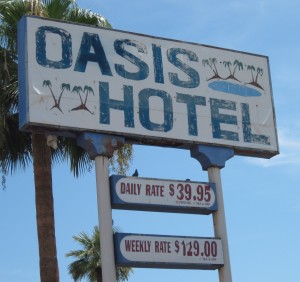 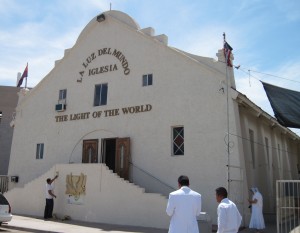 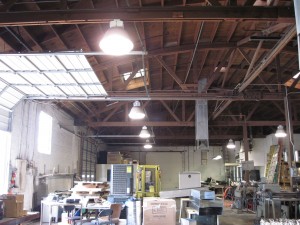 The tours will happen in three shifts starting at 8am, 9am and 10am at the Boxing Gym on the corner of Grand, 15th Avenue and Roosevelt. Here’s the breakdown of the tour guides and the shifts:

Tickets are $10 per person and can be purchased online here.

Thanks to a gracious offer from Beatrice, Blooming Rock is giving away 2 free tickets for each shift.  The first three people to leave a comment on this post will get 2 free tickets for the shift they request, on a first come first serve basis on the preference of times.  Please be sure to leave your full name with your comment.

(Unfortunately I will not be able to attend these fabulous tours and the festival as I am leaving on a trip to Europe this Thursday.  But I would love it if you guys let me know how it was and what you learned by leaving a comment afterwards.)

Leave a Reply to Dora