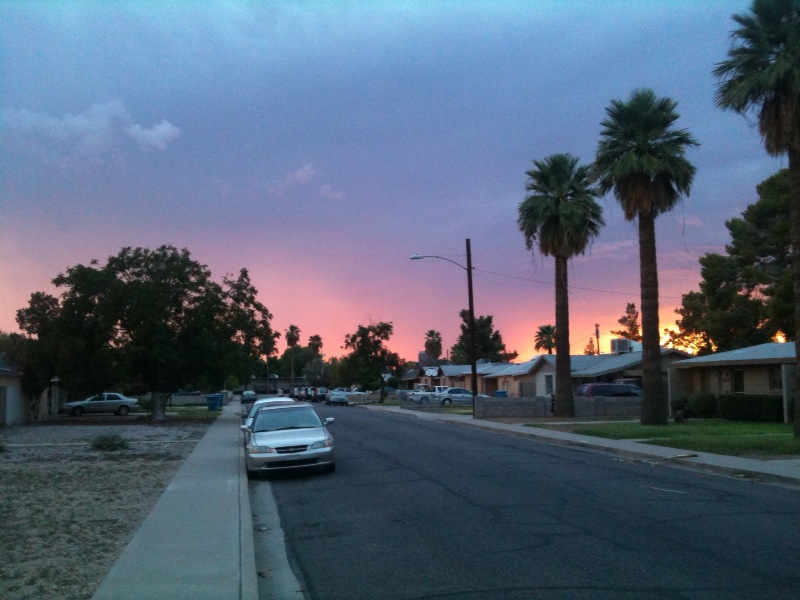 About three weeks ago, I had the pleasure of sitting down with Deputy Attorney General Greg Stanton and talking with him about a sustainable Phoenix, not only in the environmental sense, but in the economic sense as well.  Mr. Stanton is currently working for Attorney General Terry Goddard and is working in support of Mr. Goddard’s gubernatorial race.  But he is also seriously thinking about running for Mayor in 2011.  Today’s post features Mr. Stanton’s positions on economic development, City North and future growth in Phoenix, among some other things.  Stay tuned for the rest of the interview in tomorrow’s post!

Mr. Stanton on possibly running for Mayor of Phoenix:

“Phoenix is a wide-open town. That’s what I love about it. There really isn’t much of an old boy network here. If you want to be a leader, you want to jump in, then jump in!  It’s right there for the taking.

When I came back from law school I didn’t know anybody, I mean I knew my family and I knew my buddies from high school. But literally less than five years after I got back, I got appointed to the (Phoenix City) Council. Councilman DiCiccio, my predecessor and successor, resigned to run for Congress. The Council was looking for somebody and eight or nine people applied. But I was lucky enough to get it, and so I served for nine years on the Council, I loved it. I love city government, I really do.

The truth is that the job (of mayor) is open next year. And with someone like me, it’s going to take a lot of work, person by person, neighborhood by neighborhood. I’m not going to be the choice of insiders but I do believe that Phoenix is a big city. It’s an open city with a multi-candidate race. For the first time in a long time in Phoenix, we will have a real debate and people are going to have to take tough positions on issues and the citizens deserve that.  They want to see a real debate about the future of Phoenix. You can’t be all things to all people, you’re going to have to take tough positions.

I live in urban Phoenix. I have a wonderful wife who is a partner at a big law firm in Downtown Phoenix and we have a 3 1/2-year-old and a 12 week old. The decision-making process (to run for office)  is not a rational one, to give up income to work 12 to 16 hour days to chase after something… But you know what? If you love it like I do, it does make sense.”

“Luckily when I first got into Council, the word came that a group of scientists, that later became TGen, were eventually going to land here and Mayor Skip Rimza asked me to take the lead along with him to get involved in that. I was into building a diverse economy, a high wage economy. It is a buzzword that everyone in politics says now, but that was something I was doing way before (it became a buzzword), I really believed in that. I knew Phoenix could not continue down the same path we had gone for for so long in a kind of boom and bust economy. I wanted to be a part of the solution.

It was during the time that the football stadium was talked about in Downtown. I opposed the football stadium, I voted against it. And the reason is is that we had limited resources.  We had a choice, either to get the football stadium or put money into this Bioscience research center. I was the chair of the committee that oversaw the process and ultimately said that it was smarter for Phoenix in the long run. You know once in a while you’re proven right and you live long enough to see the fruits of what you have worked on. I’m proud to say I think it was the right decision then and certainly it was the right decision now.”

“I voted against City North and that’s important to Central Phoenix residents. Although it was later found to be unconstitutional, I didn’t vote against it because it was unconstitutional.  I voted against it because it was a bad deal for the people of Phoenix. Subsidizing a parking garage to the tune of $100 million on 56th street and the 101 doesn’t make sense in and of itself. Certainly for Central Phoenix residents, for the established residents, there is no way that you should be subsidizing that. I know the argument is that we didn’t actually subsidize it because it (was only a subsidy on) only future tax revenues but it’s for future tax revenues that were going to be there anyway. You’re talking about a retail center on 56th street and the 101, make no mistake you are having Central Phoenix residents, established residents, established neighborhoods subsidize that. And that’s not right.

We have Central Phoenix small businesses that could use the support. And so I thought it was the wrong public policy. I supported CityScape downtown so it’s not like I’m afraid to look at an appropriate subsidy for a business that wouldn’t be there if it weren’t for that subsidy. But when you’re talking about 56th street and the 101, that makes no sense.”

“It’s a mentality that’s been going on in Phoenix for way too long: that growth, sprawl type development, housing or retail, is good. I’m not saying that it’s bad but home-building should be reflective of a strong economy that’s been built and not an end in itself. We were building housing at the deserts end and were subsidizing it so that investors can come in from out of town and distort our housing market. That’s not good for our economy. I know it’s been the dominant factor for a long period of time. I want to be part of the solution that says it’s not going to be the dominant factor in moving forward. (We need) to build an economy that is diverse and is based on a higher educated workforce and it’s not going to happen by accident.  It’s going to be choices that we make on the City level and the State level.

The mayor appointed me to the committee that oversaw the whole planning for Downtown. But I was one of the early advocates saying you can’t have a one-size-fits-all building code. It just doesn’t make sense. I don’t blame anybody, it was just the direction that was given to the staff for many many years. Focus on big planned communities on the outskirts of town. Urban redevelopment and adaptive reuse weren’t really a high priority.

Another line I’ve heard said a lot is, years ago Phoenix wanted to figure out what it wanted to be as a city. Every time we passed up another city in population, there would be a collective cheer. Growth was a goal in itself. And I think we’re at a new point.  I certainly feel that we are at a new point where people don’t care about that anymore. They don’t care about growth, they care about quality. Are we building a community where we want growth as an end in itself? We want to grow because we want you to be here, not for cheap housing on the outskirts of town, but because of the quality of life that we can build. We want this to be an exciting vibrant city and that’s what causes growth. But not growth (as a goal) in and of itself. I just don’t think that is appropriate.

I’ll give you a good example.  One of my last moves before I went to work for the Attorney General’s office is that I voted against the proposed impact fee because the impact fee in my opinion was a subsidy. It carved out an exception for parks and the argument was that we need to subsidize home building.  I said no, growth should pay for itself. It was an eight-to-one vote, I was the one person who voted against it. And the reason is, because you gotta walk the walk, you can’t just talk the talk. You shouldn’t say growth pays for itself when Central Phoenix residents are subsidizing growth on the outskirts of town. You’ve got to send a message.  Because if the impact fees are not at the appropriate level and growth is not paying for itself, then guess what? Central Phoenix residents are subsidizing suburban sprawl! Money doesn’t grow on trees. People have to come to terms with this. Established residents, those older neighborhoods, those are the most important part of Phoenix.”

Mr. Stanton on the arts:

“My governing philosophy is two fold. I chaired for the entire time I was on council, the Bioscience subcommittee.  It was called Bioscience Education and Arts. Those are the (two) areas that I really believe in.  I really believed in building the economy that we wanted and being a part of the solution of education and having a strong arts and culture community.

By the way I didn’t view arts and culture as kind of a soft thing, something nice to have. I always argued that it was critically important to our economic development. If you don’t have a strong and vibrant arts and culture community we simply can’t have the economy that we want. If you don’t have that (kind of an) economy it’s going to continue to be a sprawl economy based on sprawl development, City North and things like that. And that’s not what builds community and that’s not what builds the economy that we want. You know what?  I’m not an artist, I was an elected official that supported the arts, that supported the economy I wanted to build.”

“Education: Central Phoenix school districts, urban school districts, as they go so does the Central Phoenix. If we don’t have strong inner-city urban districts, we can’t be successful. When I first (spoke to) the Council on the issue of education, they wondered what does Phoenix have to do with education?  Number one, the mayor has the bully pulpit to stand up for urban districts.  You need to be an advocate, you need to use that perch to speak your mind about what’s going on in public education. Number two, I think we need to continue and move forward. You know this bad economy isn’t going to stick around forever, things are going to change. The partnerships that we have with public education (are good). We gave them grants for schools within schools, to focus on nursing or education, areas that we know we’re going to need in the future. That kind of vision we need to continue I would argue (with) double (the effort).

Let me tell you something, if we wait for the legislature to do something, it ain’t going to happen.  It’s really up to us to have the vision of the future we want and go get it. Don’t sit around and not go after it! Do what you can! Mayor Rimza and I were chasing higher education, Mayor Gordon took it to the next level and put it in the bond election and I thought that was the right thing for the future Phoenix.

The reason that I say that, is I think in the next year’s election there’s going to be a lot of talk about whether we’ve done too much for Downtown and whether we should shift (our attention) elsewhere. I actually think it’s a false debate. What’s going on in Downtown, the transportation, the arts, the science-based economy that I want to build, and healthcare, if we don’t support that we won’t have the strong neighborhoods. I actually think that anyone who tries to present an urban (vs.) suburban adversarial relationship is wrong. I think they truly go hand in hand.”
Photo Credit:  The Avalon neighborhood (my neighborhood) in Central Phoenix.  Photo by the author.