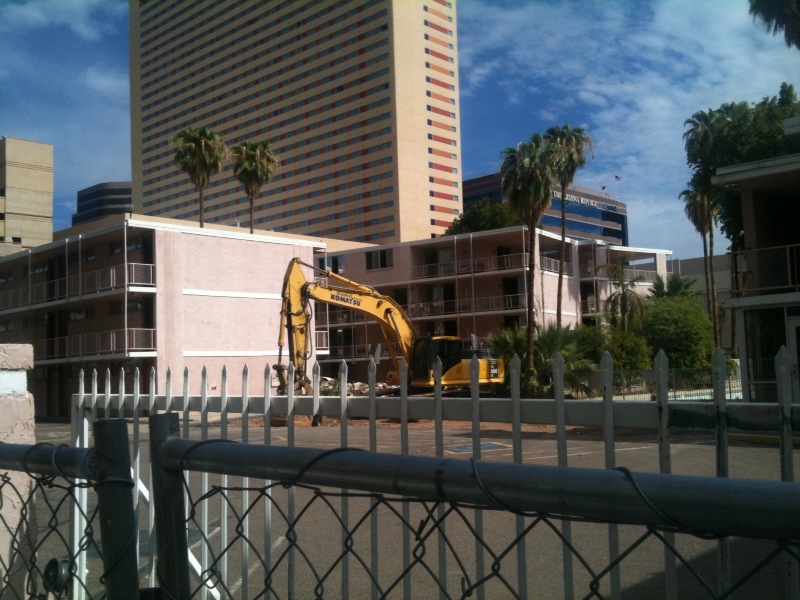 1.  The City used funds from the Downtown Phoenix Hotel Corporation to buy the Sahara building.  Apparently part of this deal was the temporary use of the site as a parking lot for the Sheraton Hotel.  This is the “done deal” City Manager David Cavazos was talking about.

2.  When several community members suggested the lot become a park or a green space, Jeremy Legg, the City applicant for the parking use permit, mentioned the Civic Space Park is just a block away.  Wait, so we can have TOO MANY green spaces, but never enough parking lots?

3.  The resulting parking lot is not currently planned to be open to the public.  It is planned to be used by the Sheraton and other surrounding businesses.

4.  Although the City did not require any parking due to the new Downtown Code, there is a parking garage for the Sheraton that parks 500 cars.

5.  This parking lot at the Sahara will serve as overflow parking for when the Sheraton has events.  I’m glad the Sheraton is attracting so many people Downtown.  But we need to encourage people to take the Light Rail to the Sheraton and stop enabling people’s addiction to their cars.

6.  The use permit was granted for the next 5 years!  5 years is a long time in this continuously changing economic landscape.  We’re going to have to live with this scab of asphalt in the heart of our city for another 5 years.

7.  Jeremy Legg and his engineer said they are planting more trees on this parking lot than are required by the City.  Whereas the City requires 5% shade coverage, they’ll be providing a whopping 7%.  And this is relatively a good thing as opposed to a parking lot with very few trees.  But let’s not confuse the matter.  This is still an asphalt parking lot with trees.  It’s like creating a physical wound in our city and hoping a little makeup will fix it.

8.  Phoenix Community Alliance, Downtown Phoenix Partnership, ASU and of course the Sheraton all signed letters of support for demolishing the Sahara and paving this parking lot.

9.  The State Historic Preservation Office declared that the Sahara does not have enough historic value to warrant preservation, an assessment that is refuted by many who recognize the value of mid-century modern buildings. (A clarification:  The SHPO said the Sahara did not qualify to get on the National Historic Register, Jeremy Legg used this statement to imply this building was not worth saving).

10.  The City made a deal with the Downtown Phoenix Hotel Corporation on a publicly-owned lot and put the Corporation’s interests above the interest of its constituents.  I realize that the logistical nightmare of maintaining the Sahara was overwhelming to the City.  But this behind-closed-doors deal with the Hotel Corporation that was done before residents could ever get involved undermines my trust in the City Government as a representative of the people of Phoenix.  It’s more a lackey to the Corporations of Phoenix.

To read another reaction to yesterday’s hearing, check out Seth Anderson’s post The City of Phoenix and ASU Demolish More Phoenix History

Photo Credit:  The bulldozer on site yesterday at the Sahara.  Photo by the author.