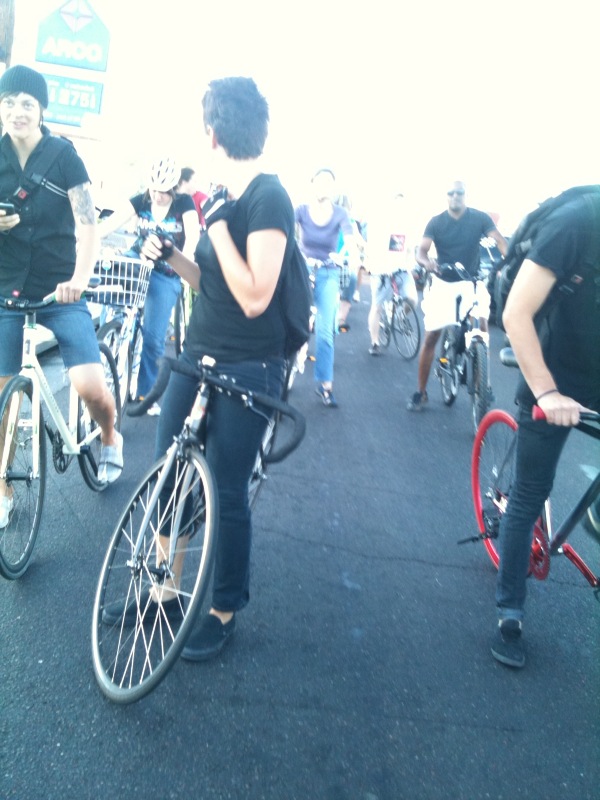 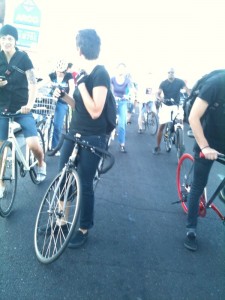 Today’s post is by Willard Williams Jr. (aka Beau), who used to work with me at an architecture firm in Phoenix and who is now a designer for a residential architect in San Francisco. Beau has more than six years of hands on experience with complex design tools, such as Building Information Modeling (BIM), expertise he has applied to a number of projects. Beau is working towards completing his architectural licensing and one day owning his own firm.  Beau rides on two wheels whenever he can.

Bike lanes as far as the eye can see…..is what most major cities need and is what San Francisco’s Superior Court has okayed after recently lifting the four year old Bike Plan Injunction.

Riding bikes is great for recreation or for everyday transportation, all of which contribute to a healthier planet, a healthier you and more cash in your pocket. Riding your bike as a form of transportation also contributes to mental health. Each ride gets easier and becomes something to look forward to.  Mentally your perspective changes; you are in much more control of your surroundings, and far less stressed than after having endured the agony of the Monday morning commute. The passing of the Bike Plan will allow “growing numbers of people to feel more confident, comfortable and safe when they bike to shop, to work and to play”, says Renée Rivera, Acting Executive Director of the San Francisco Bicycle Coalition.

Suburbanites have a difficult time riding to work, and wouldn’t fathom using a bike to pick up little Jimmy and taking him to soccer practice, grabbing a few groceries or haul another flat screen TV home.  This is a statement of how we have redesigned our infrastructure to become more reliant on automobiles.  Pre-automobile, you could only buy what your horse could carry, literally. The invention of the automobile and much more popular SUV, has nurtured an addiction to hyper consumption. We can now fit everything we could possibly imagine in our sporty SUVs, drive through fast food joints for a quick meal, and continue to compound our need for material validation. Take a step back, would obesity be a problem if everyone rode everywhere and were confined to purchase subsistence rather than gluttony. Bikes should be a testament to the human spirit, and the idea that we go where we want, because we want to work to get there.

For me bikes represent an evolutionary leap both in technology as well as exemplify “lean” engineering.  When I think about bikes I think about the Wright brothers’ bike shops which led ultimately to the first working airplane and Steve Jobs saying computers are the bikes for our minds.  We have built our oversized lives just far enough away from our work lives, which makes it impossible for most to consider the idea of riding for transportation in order to save our existence, our selves, and our community.  This is the last time I work further than I can ride safely.  Saving everything does come down to the individual and not the big government or businesses.  We are a country built for capitalism, commerce and the auto industry and its affiliates.  As you saw in ‘Who Killed the Electric Car?’, these corporations and our government would rather limit commercialization, and subsequently destroy hopes of our ever creating vehicles that would contribute to improving air quality, and our reliance on foreign oil for generations to come.

Recently San Francisco Superior Court voted to add nearly double the miles of new bike lanes on city streets. This is a great triumph for a model city like San Fran and its community supporters. Being less dependent on fossil fuels coupled with safer streets for bicyclists will hopefully inspire other cities to do the same. I anticipate the overall health and well being of the city will increase as people take ownership of their health, get in better shape and endure less mental stress.

So I urge you, ride a bike like your life depends on it! Contribute to the demand to build more bike factories and expand bike lanes. Lets go back to a time long ago (110 years to be exact) when bikes where the norm, a necessity.  To a time when though we were an industrialized nation at a proverbial cross roads; the bike was the most efficient use of human energy and most efficient method of transportation. Please down size and support any efforts to protect bicycle heroes in your city.  Make your friends wonder about your sanity.  Support events like Critical Mass, take the kids and share with others how things can be different, and that “doing” will eventually get us to“being” more responsible for our community and future. Check the tons of resources (try local first) who can assist in educating you in learning about the benefits of bikes, bike safety, and how to get involved in the movement. It is an activity both poor and rich alike can enjoy, but all Americans should rally to do for our future, our nation, and our world.

Photo Credit:  Photo of a Critical Mass Phoenix event in May 2010.  Photo by Taz Loomans.