Saving the Sahara: Calling the Community to Undo a “Done Deal” 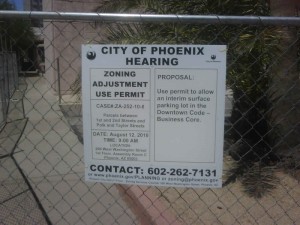 According to the Arizona Republic article today by Emily Gersema, Ramada Inn in Downtown Phoenix Days from Demolition, the $700,000 demolition of the old Sahara Hotel, currently a defunct Ramada Inn, is scheduled to happen later this month. Before we go into why this building is important and why it’s worth saving, let’s first visit the reason why it’s being demolished:

The City of Phoenix is planning a $700,000 demolition to make room for overflow parking for the Sheraton Downtown Hotel while there are loads of empty lots all around downtown that would work just as well, not to mention, be much cheaper.

The parking lot is just an interim use.  This site is ultimately slated for the new ASU College of Law.  Granted, it’s good to hear that there are plans to bring the College of Law to downtown.  According to the Republic article today, “Within two or three years, Arizona State University hopes to expand its downtown Phoenix campus to include a new building at the site for a new College of Law. The state budget crisis has forced ASU to wait for funding.”  As you can tell, there is some uncertainty around the fact that the College of Law will even go on this site at all.  This part of the plan is definitely not a “done deal” as City Manager David Cavazos likes to say about the demolition phase of the project.

If this all sounds suspect to you, like it might not be a very well thought-out plan, you’re not crazy.  It really isn’t a very good plan.  There doesn’t seem to be a good reason for why ASU and the City of Phoenix have their sights set on the Sahara when there are so many dirt lots close by that could be used for the same purpose.

I know, I know, if the City decided it was the right thing to do, then it must be, right?  Afterall, the City is doing what’s best for Phoenix.  Well, far too many of us have bought that for far too long now.  Maybe the City is putting the interests of developers and ASU, yes, ASU, above the interests of the residents of Phoenix.  I support ASU, I am an alumni, and I think they do great things for Phoenix.  But is the University beyond reproach?  Is everything they have done in downtown and are planning to do hands down the best thing for our urban core?  Hardly!  Wake up fellow Phoenicians, ASU and the City of Phoenix do not always know best.  We, as a community invested in the sustainable growth and vibrancy of our downtown, must raise our voices for what’s important to us, because the City and ASU sure aren’t doing it.

You may be one of those people who thinks the Sahara (or the Ramada Inn) is just an old pink run-down piece of crap that would be well served with a fresh asphalt parking makeover.  Rachel Dawn Luptak, a local interior designer and a downtown Phoenix lover, wrote a brilliant piece on why this is just not true.  Check out her article if you need convincing.  To me, this planned demolition of the Sahara Hotel is a current-day symbol of how short-sighted our City has been in terms of historic preservation.  It’s a prime example of the countless times City officials (like David Cavazos) have chosen to bank on big new buildings in place of preserving and building upon what’s already here.  The mentality that has brought us the barren, blank-walled, walker-unfriendly downtown that we have today is: newer is better, let’s blow up the old stuff, even if it’s just for a brand, spanking new parking lot.  This mentality is documented in Rob Melikian’s book Vanishing Phoenix that features the many buildings that are now gone forever, often replaced by empty lots.  We can lament all day why, oh why, did we allow those beautiful buildings to be demolished?  But that won’t bring them back, it won’t give us the historic, dense, pedestrian-oriented downtown that we’ve lost.

But we have a chance, as the residents of Phoenix, to stand against the demolition of the Sahara before it becomes an addendum to Vanishing Phoenix.  Yes, the bulldozers are scheduled for later this month, but between now and then, we have a window of opportunity to make our voices heard, to interject in the all-knowing, all-powerful plans of City Manager David Cavazos (doesn’t he work for us anyway?) who thinks he knows what’s best for downtown.  You can show up and speak up at the public hearing scheduled for Thursday August 12, 2010.  This is a public hearing (where the City will hear the public) in regards to allowing an interim parking lot on the site.  This is our chance to speak out against this not so well thought-out plan and hold our city officials accountable.  We have a voice, let’s use it to affect change instead of complaining after the Sahara is lost forever.

Photo Credit:  The Public Hearing Sign displayed on the fence of the Sahara.  Photo by Jim McPherson