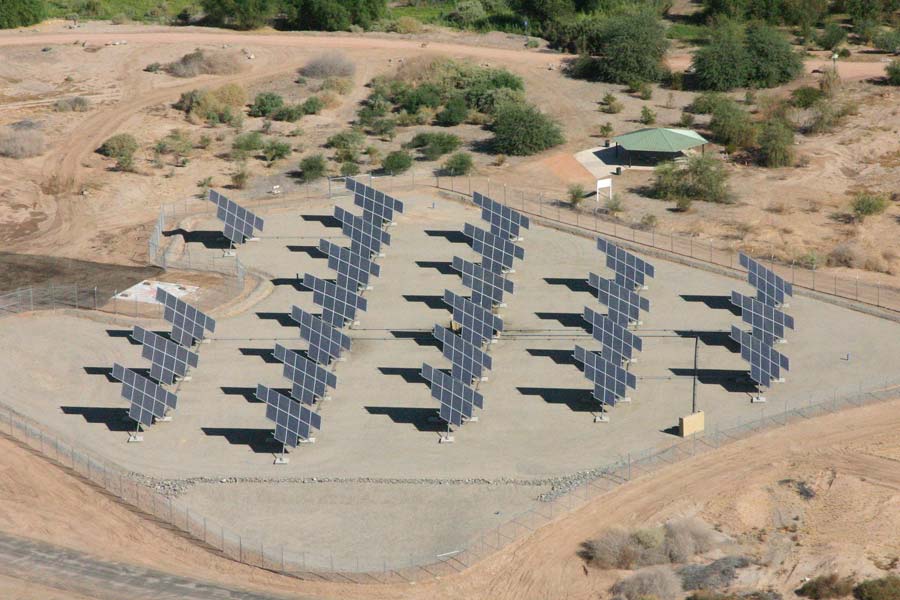 Why Solar Gardens are a Perfect Fit for Phoenix

The Community Solar Garden Bill is about to be signed in Colorado by it’s governor, Bill Ritter.

This bill essentially allows homeowners to buy into a share of a Community Solar Garden.  A solar garden is similar to a windmill farm, but on a smaller scale.  It’s a place that houses a number of solar arrays that generate enough power that can be distributed to many different households.  It’s aimed at people who can’t install solar panels on their rooftops for whatever reason.  They may be renting, may live in a condominium, may have a roof that’s in shade, or a multitude of other reasons.  The beauty of the Colorado model is that the Community Solar Garden ‘subscriber’ is eligible for all the rebates and incentives that she would get had she installed the solar panels on her own property.  And furthermore, the electricity produced from her portion of the solar garden then is deducted from her utility bill.

This idea addresses the two biggest problems with solar power that I mentioned in my previous post How Sprawl could help Phoenix become a Pioneer in Solar Power.  The first is that solar panels are extremely inefficient and you need a great deal of square footage to generate a decent amount of power.  The second is that it’s still very expensive to install solar on your roof.  With solar gardens, you’re not limited to the square footage of your roof to produce power, plus the costs of purchasing these panels is lower than installing panels on site.  The cost of going solar is reduced (though it’s still not cheap) because you’re buying into a share of already-existing infrastructure rather than adding a brand new array on your home.

But the question (and opportunity) that arises out of this great concept is:  where are these solar gardens going to go?  The answer is not to put these renewable energy gardens on greenfield (or previously undeveloped) sites.  The opportunity is to integrate them into the existing infrastructure of the city, making it easier and cheaper to distribute the power back to households and businesses.

This is why solar gardens would work really well in Phoenix.  As I’ve discussed in my previous post, we could use some of our parking lots (via solar parking canopies) and the roofs on big-box stores, malls and strip malls  for solar garden space.  Lord knows, they’re big enough!

This is how it would work:  utilities (APS or SRP) or private investors would lease the space from a business, say Westcor (owner of many local malls) with a huge roof and/or a huge parking lot.  Westcor would then be making money from an asset that they never knew they had (their rooftops and/or parking lots).  The utility or private investor would sell shares of the solar panels to individual homeowners, being able to cover their leasing costs, and not having to develop new land.

Think Colorado is the first state to make the concept of solar gardens come to fruition?  There are actually solar gardens up and running in Sacramento, CA, St.George, Utah, Falmouth, Mass and Brewster, Mass.  Closer to home, there is a solar garden created by a partnership between the city of Yuma and APS at West Wetlands Park. 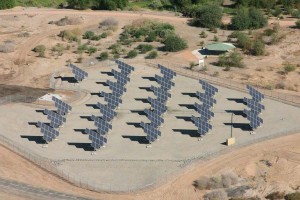 The Solar Garden in Yuma – photo from SolMates, a publication for APS Solar Partners

And, did you know that the utility in Tucson is seeking regulatory approval to build a solar garden near the airport on land that would otherwise be difficult to develop?  The model of the solar garden is taking hold around the country and around our state as a viable way to create renewable energy.  When solar gardens hit Phoenix (and they will) – we have an opportunity to strategically integrate them with what we already have plenty of, that is – parking lots, malls, strip malls and big-box retail.

How do you see solar gardens being created in Phoenix?  Leave me a comment with your thoughts!