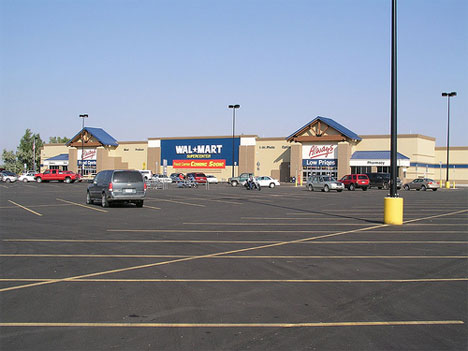 How Sprawl could help Phoenix become a Pioneer in Solar Power

There are 2 major drawbacks of solar power production.  First, photovoltaic (PV) panels are extremely inefficient.  It takes 240sf to
produce 2kW of power, which is about half of what an average home uses in electricy per month.  Second, PV panels are very expensive even after rebates and incentives.  The upfront cost of a solar array that produces enough energy to make it worth your while is going to be around
$25,000.  With rebates and incentives you will end up coughing up around $15,000 or more.  That’s pricey!

These two drawbacks, in-efficiency and cost, make it hard for me to believe that with the current technology, residential solar power is a viable option.

Thinking out of the box, or into the Big-Box with Solar:

Here’s the opportunity:  Remember how SPRAWL is one of the biggest sustainability challenges I talked
about in Monday’s post?  Here’s an idea on how we can turn SPRAWL to our advantage using solar power.

Sprawl is a result of extremely low-density development, which is something we’re very good at in Phoenix.  Big-box stores (think Walmart and Costco) and the sea of parking associated with them are major contributors to sprawl.  But let’s face it, these stores are already here and they are a part of our city at this point.  So the question is, can we turn these big-box bohemoths into an environmental asset instead of a liability? 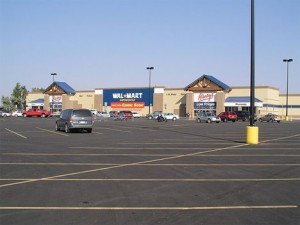 Instead of going out into undeveloped land and creating solar farms, it makes more environmental sense to integrate solar power production into the existing fabric of our city.

Solar parking canopies and rooftop solar on big warehouses are already happening in places like California and Washington.  We’re finally catching on in Arizona too. In fact, it was announced today that Crawley Companies is installing a huge rooftop solar array on one of their warehouses in Phoenix.  I’d like to see much more of this happening and not only with warehouses either.  We need to add solar PV panels to every building that takes up an inordinate amount of land – big-box retail stores, malls, strip malls, you name it.  If you’re going to be a SPRAWLER at least produce some clean renewable energy!

You may be thinking, solar power has been around since the 70’s and everyone’s already come up with ways to make solar power effective.  Not true people!  It’s weird, but solar power hasn’t had many creative leaps since its inception.  In fact, solar power manufacturers are frantically trying to catch up to this era with more efficient products.  And with all the talk and buzz about sustainable cities, we’re not moving fast enough to make solar power a viable option, even in sunny cities like ours.  So let’s think, brainstorm, create, imagine, ideate around this!

Tell me your ideas about solar power and how to make it into a viable option for Phoenix…leave me a comment!