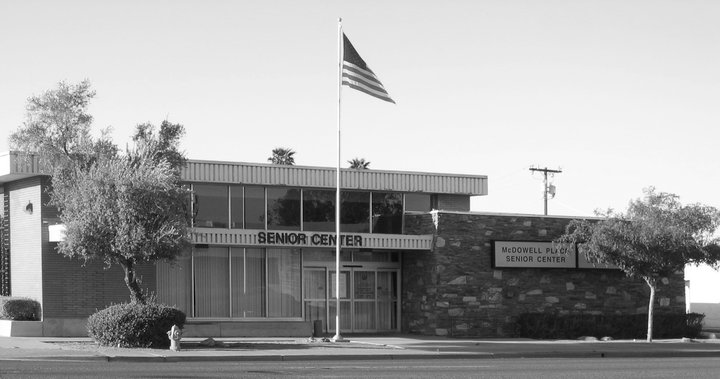 Today’s guest post is written by Donna Reiner, PhD and Bank Maven.  Donna spoke at last weekend’s Modern Phoenix Expo about Mid-Century Modern Banks in Phoenix.  Some of the banks Donna highlighted are buildings you might drive by all the time and not give a second thought to.  They are a part of our everyday fabric and we may not notice them, but on closer inspection, they are fantastic examples of mid-century modern Phoenix architecture.  Donna’s work with banks is important because it helps raise awareness of these historic structures so they don’t fall into disrepair or worse, get torn down.  After reading her post, you’ll have a whole new appreciation for the cool everyday buildings that surround us.

The foundation of new bank design concepts that dominated post-WWII America focused on service, interior functional arrangement, visual expression, and merchandising. Greatly discussed in the banking journals from the late 1940s through the 1960s, the stage was set for young and creative architects of the time.  With this inspiration, the heads of major banks and savings and loans in Phoenix each embarked on an expansion of their institutions to meet the needs of the rapidly growing valley population and left a remarkable legacy of modern commercial architecture. Without feeling the need to “brand” their bank with the same conservative style or design for each branch, the heads of these major financial institutions sought architectural firms that would create a distinctive building for each branch that might complement its location or at best, stand out from its surroundings. 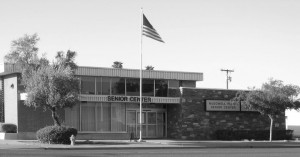 The number of Phoenix branch banks built between 1950 and 1975 reflects the city’s urban expansion as the primary locations were on or near prominent corners of arterial streets such as McDowell, Camelback, Thomas, and Indian School Roads, and Van Buren Street (all running east/west) and Central Avenue, 19th Avenue, 7th Street, 7th Avenue, 16th Street, 24th Street (all running north/south). These locations prioritized automobile access and
reflected the changing boundaries of the city annexation program. 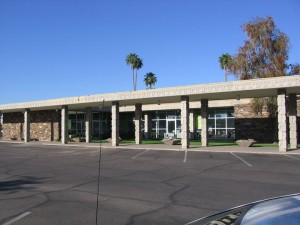 Most of the extant branch bank structures built during this period are one-story high with a flat roof and free standing.  Typically
of masonry construction, specific buildings materials include concrete, large glass windows, steel, and brick with various items such as native rock as part of
the exterior ornamentation. 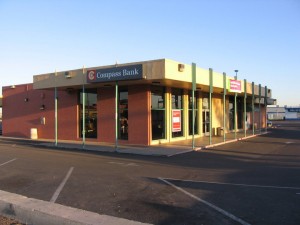 Because of the position of the building in relation to the street, the bank might have the entrance on the backside as that would be facing the parking lot, or have two entrances, making it easier for customers to park and quickly enter the building.  Generally the structures do not fill the entire lot with the remainder of the lot consisting of parking and some landscaping. 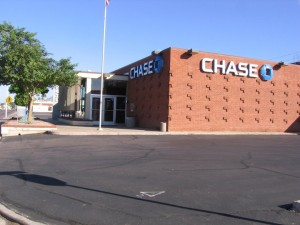 Interior designs provided a friendly atmosphere.  This may have included commissioned art work, a defining feature, an openness of the interior, color on the walls, coordinated furniture and carpeting, and lots of natural light.  Innovations may include a geometric shape of the building or design which could carry over into the interior design, orientation of the bank with respect to the streets, adaptation to the desert climate through the use of window sun shades and shapes, and the use of lights. 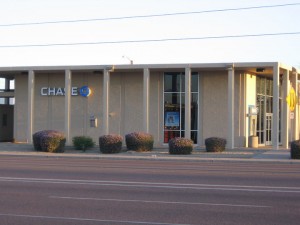 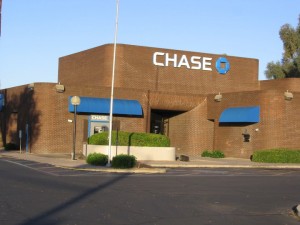 Another innovation was unusual locations.  Phoenix boasted having the first fly-in branch bank in 1956 located at Sky Harbor Airport.  This particular innovation did not become very popular in other parts of the country nor did it last long in Phoenix.

As is common for many mid-century modern buildings, it is difficult to apply stylistic labels to most of these Phoenix branch banks. Sometimes the
architects combined elements of the day and other times one can see influences of one particular architectural master.

Do you have a favorite mid-century modern bank building in town?  Leave me a comment!

If you want to receive news, analysis and tips on modern and sustainable architecture in Phoenix, make sure to subscribe to the Blooming Rock Newsletter!