I enjoyed attending the various events last week set up by Modern Phoenix.  The entire week-long series of events was immaculately organized by Alison and Matthew King and their team and was well-attended as always.  I didn’t have a chance to go to all the events, but this week I’ll post my thoughts on
the events I did get to attend.  Let’s start with Thursday night’s Panel Discussion on The Restaurant Revolution hosted by David Tyda.

The panel comprised of:

Hayes McNeil of Plus Minus Studio – Project: Postino Winecafe (on Central)

DJ Fernandes of The Construction Zone – The Tuck Shop

All the projects featured were wonderful examples of adaptive reuse unique to Central Phoenix.  You can’t find projects like these in the Scottsdale or our other suburbs.  As Peter Koliopoulos, my former boss and designer of The Vig Uptown, said, this new wave of adaptive reuse projects is just the beginning of Phoenix becoming a real city with it’s own identity and character instead of an anonymous series of chain restaurants and big-box stores.

What I really appreciated about this particular group of panelists was that they not only respected and admired Phoenix’s wonderful heritage of mid-century
modern buildings but also understood the impact of what they were doing on the neighborhoods and the city itself.

DJ Fernandes specifically chose a dilapidated building in a predominantly Hispanic, lower-income neighborhood and rehabilitated
it beautifully into The Tuck Shop.

Hayes McNeil, my former classmate at the ASU School of Architecture, now with Plus Minus Studio, talked about his efforts to address the neighborhood
scale in his re-design of the old Katz’s Deli into Postino’s on Central.

The one person who was not an architect or even in the design industry was Aric Mei, the owner and designer of The Parlor.
Aric was actually well versed in good design and well-spoken as well.  I also appreciated his humility and humor.  Aric and his crew did a fantastic job of rehabilitating the old Salon Venus into a gorgeous pizzeria.  What gives The Parlor it’s character and beauty is the use of mostly reclaimed materials.  Aric explained that they weren’t able to maintain much of the interior structure of the building, in fact they had to gut it leaving only two of the four exterior masonry walls intact.  He had to work very hard to keep that great masonry screen wall in the front which has become the restaurant’s signature look.  Aric insisted that the contractors keep the “waste” material of the demolition.  He mentioned he encountered some puzzled and annoyed looks from the contractors, but they understood in the end what he was trying to do.  Aric was able to reuse much of the existing sprinkler piping and wood from the existing building.  He was also lucky that the Bahama Breeze in front of his site went out of business at just the right time and he was able to use a lot of their equipment, seating and materials in his renovation.  Kudos to Aric and his team for a fantastic, environmentally responsive, well-designed project! 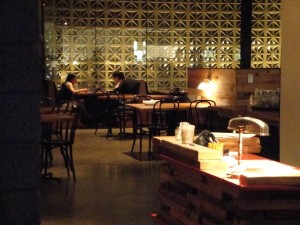 Even though all the projects presented on the panel discussion are terrific examples of making old buildings contemporary, beautiful and relevant again, my
favorite from a sheer architectural perspective is Wendell Burnette’s St. Francis.  He took Harold Ekman’s old office that has had many iterations and turned it into a uniquely contemporary space.

There is one feature which stands out and almost looks like jewelry on the interior seating space and that is the King Point Truss that Wendell pointed out during the discussion.  It’s what you see here and it supports the existing second floor structure of the building. 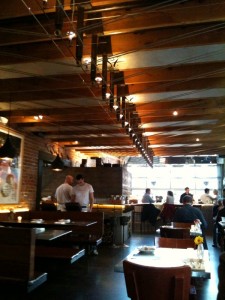 Now this certainly wasn’t the most inexpensive way to design the space, but it was certainly one of the most beautiful.  It adds a luxurious twist to the restaurant floor while working to enhance and support the existing structure.  Wonderful!  I could go on and on about all the things I like about Wendell’s St. Francis design, but allow me just one more.  I very much appreciate the two-story garage door facing Camelback.  Garage doors are a dime a dozen in restaurant settings, but this one is one of the more successful ones.  It serves as a fantastic way to engage the street, open up the restaurant and
works well with our 6+ months of temperate climate.  Plus it’s does a great job blurring the line between the interior (semi-private) and exterior (public/street) spaces.

The panel discussion on the whole was informative, inspiring and interesting and it highlighted the right things – the beginning of an identity for Phoenix, the impact of successful adaptive reuse projects on the city and the sustainability behind reusing existing spaces and materials.  One thing I found missing was the representation of women and/or minority architects on the panel.  As a minority, woman architect myself, this was something I felt the absence of personally.  It might be that there are no women and/or minority architects doing such projects at this time and it is not the fault of the organizers for not having them on the panel.  However, I think it’s a glaring under-representation and must be addressed in some way.  We need women/minority architects on the forefront of the great work that’s happening in Phoenix.  I will personally work on this and call on the local architecture community to work on this as well!  I hope next year and in the years to come, this pointedly missing group will be present and vocal on the center stage
of great architecture in Phoenix.

What are your impressions of these restaurants?  Leave me a comment!

If you want to receive news and tips on modern and sustainable architecture in Phoenix, make sure to subscribe to the Blooming Rock Newsletter!