Lennar Homes recently introduced their “NextGen” multigenerational house concept, a concept that has grown from some recently staggering statistics that show increased numbers of adult children moving home and baby boomers retiring. Some of these statistics are as follows:
– 30 percent of adults live in a doubled-up household
– Nearly one out of every seven (14.2%) of the country’s 25-34 year-olds live with their parents
– 350,000 baby boomers will turn 65 every month over the next 18 years

Lennar’s solution is a home within a home. The plan of this model provides a separate entry, bed, bath, laundry, living, and kitchenette. (It is important to note that it is a kitchenette, not a kitchen, which means it cannot have a stove. This distinction is made because current zoning does not allow a full second kitchen.)

After searching for more detail and studying the plan I find it quite ironic that it is called “The Independence.” As typical of big builders, the independence of this plan goes no further than its walls. Let’s break down this design to see how it lacks location, resource, and financial independence.

Location. The catchphrase of real estate is “location, location, location.” The first thing that jumps out when looking at the location of where these homes are being built is its car DEPENDENCY. In looking at their current house for sale, (5754 W Gambit Tr Phoenix) it has a Walkscore of 5 out of 100, is located 26 miles from downtown Phoenix, and is 4 miles from public transit. These homes are supposed to be the next generation of living for retired baby boomers and recent college graduates. The danger of senior citizens driving is well documented and there is much conflict over taking away licenses. Rather than take away their licenses, wouldn’t it be wiser to provide transit-oriented living for seniors to maximize their mobility rather than limit it? Also, a recent study by the Wall Street Journal showed that 88% Millennials (25-34 year olds) want to live in an urban setting which these homes clearly aren’t in.

Resource. The location and design of these homes make them incredibly resource DEPENDENT. As I showed in the previous paragraph, the construction on the suburban fringe uses immense amounts of resources (desert land, roads, utilities, etc) to even put them out there. Location aside, the house design is very poor. The Division Presidents boasts about Lennar’s energy saving specifications such as vinyl windows, radiant barriers, and 14 SEER air conditioners. Not only are these specifications very standard, they do very little to compensate for the lack of passive strategies to conserve energy. (He also doesn’t mention the use of the minimum amount of insulation per code.) You can see some of the flaws in the plan and rendering below. 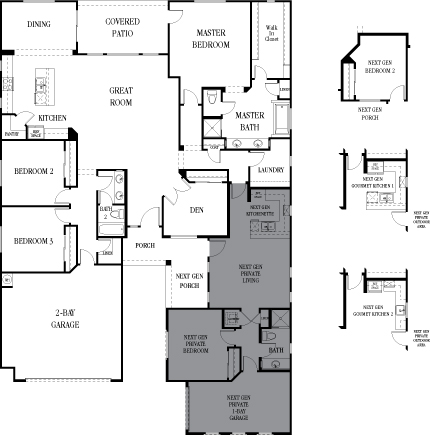 The house has a predominantly east-west orientation, small southern overhangs, almost zero cross ventilation, and a room arrangement that allows for very little natural light. The location of the garages on the south façade will help mitigate summer heat gain but while that is a plus, the house has no “eyes on the street” for reducing crime and building community. The house also is on the larger side at 3000 SF for 4 bedrooms.

Financial. An obvious financial DEPENDENCY is the commuting and automobile costs. Glendale is 18 miles away, Phoenix is 26 miles, Scottsdale, Tempe, Mesa and the rest are even further. Car, repairs, and insurance costs aside, a commute to any of those cities in a typical car would cost at least $6 a day or roughly $1560 a year. This expense might not be large for the main family or pertain to seniors, but remember, these are also targeting adult children moving home, most of whom do so to save money to pay off their college debts or for their own future home.

The main ideas behind these homes are fantastic and under represented in the Phoenix market. That being said, these ideas are being marketed as the next generation of housing, but to me they are just a new cover on an old book that has led Phoenix to where it is today.

If you want to see one of these Lennar NextGen Multigenerational homes for yourself, there is a model home currently on display at IKEA in Tempe: